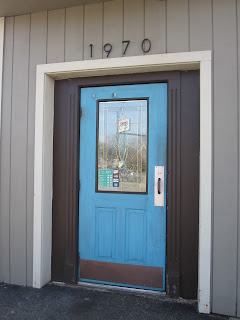 Last Sunday I woke-up really craving good brunch food -- our friends Kaley and Jon go out to brunch dates every weekend and I'm slightly jealous of the gorgeous photos that Kaley posts of the food from their brunch dates. Blue Door Cafe had been recommended to me by Kaley and another friend, so we decided to take a drive out to Cuyahoga Falls around noon.

The Blue Door Cafe and Bakery updates their menu weekly, so although none of the items we ate are currently available, I just took a peek at the menu that was posted March 3 and there are several items that look superb, like the French Waffle with peanut butter and blood orange jelly.

For brunch last week, I selected the Blood Orange Crepe served with white chocolate mousse, caramel vanilla macroons, and candied orange. This was incredibly divine, the crepes were cooked to perfection, the blood orange came through nicely, and the caramel sauce added just enough sweetness. 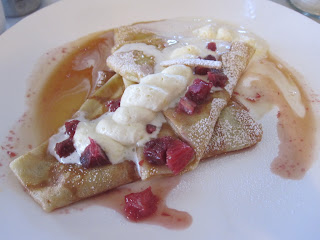 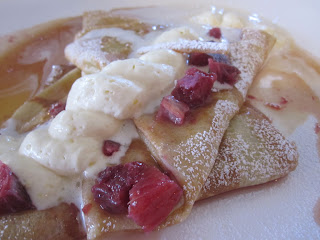 Dave ordered a more savory item and choose something off the vegan menu called Pinto Bean Ragout which was served with baked beets, brussels sprouts, scallions, and toasted sunflower seeds. Dave thought this sounded really good, but ended up not being a fan of it. I had tried to talk him into an omelet (which looked ridiculously good when the table next to us received theirs), but he chose this instead. You live and you learn.

It's important for me to note that we didn't like this due to personal taste, not because it was under seasoned, burnt, etc. Taste is such a personal thing, so I want to be clear that just because we didn't enjoy it, doesn't mean that there was anything wrong with it, I think there's a very clear distinction between "I didn't like it" and "it was awful". 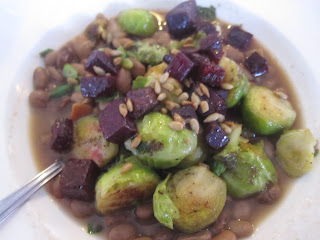 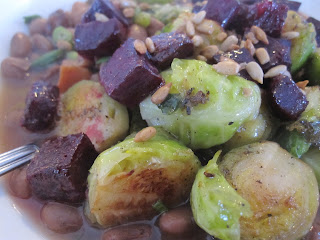 As a side dish we split the Fingerling Potatoes which were Russian fingerling potatoes and caramelized sweet onions. We thought this was really good as well, I don't eat potatoes too often, so whenever I go out for breakfast or brunch I want to see a good potato dish on the menu. The onions and potatoes had wonderful flavor and were seasoned perfectly. 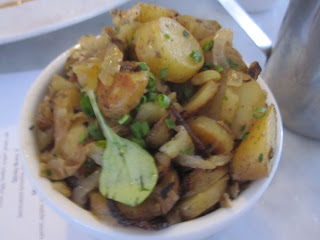 While we were waiting for our brunch, we noticed a table near us had two large pieces of a heavenly looking dessert delivered to their table. We asked our server what they had ordered and she told us that it was Oma's Torte which varies every week. However, our server also said that it sells out pretty quickly, so we asked her to place our order before our brunch was served. Luckily we scored the last piece of this heavenly dessert and it was well worth the wait. 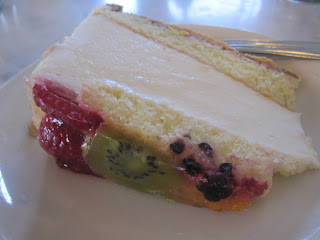 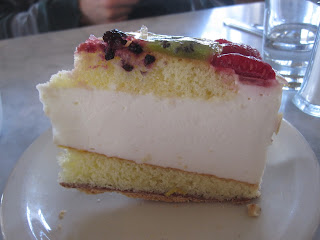 We arrived at the Blue Door Cafe around noon and had to wait about half an hour for a table, the restaurant itself is pretty small and doesn't have a lot of parking. The businesses surrounding the Blue Door cafe weren't open on Sunday, so we were able to park relatively close to the restaurant and the wait was palatable due to the delicious smells wafting from the windows of the restaurant. The interior of the restaurant was bright and charming despite the small size.

The menu is a little pricier than what I would normally spend on brunch, but Chef Torsten Schulz does a superb job of creating interesting dishes and the portions are pretty large compared to most restaurants. Our server was professional and courteous, we also appreciated her attentiveness, such as when she put aside the last piece of Oma's torte when we suggested that we were going to be interested in ordering a piece. We left brunch full and happy, the Blue Door Cafe and Bakery is somewhere that I would certainly go to again, especially with out of town company.

My rating for Blue Door Cafe and Bakery: 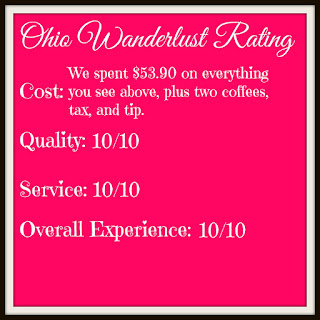