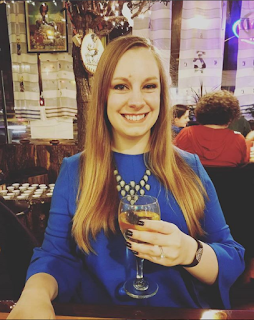 Welcome to my first post of 2018! I haven't forgotten about Ohio Wanderlust, the holidays are always a little crazy for me and the winter months sometimes make it hard to commit to cool places and events due to the volatile weather. In the last few weeks I've made several dinner plans at new places, purchased tickets for events, and signed-up for festivals I haven't attended before. In the next few months I hope to ramp up to even more posts before the summer festival season when it's much easier to leave the house to walk into balmy 80 degree weather over the 9 degree weather we were enjoying at the beginning of 2018.

In 2016, Dave and I made reservations with some friends to check out Empress Taytu on St. Clair Avenue in Cleveland. It was the first time many of us had experienced Ethiopian cuisine and we loved the experience. Some friends who had missed the dinner at Empress Taytu expressed an interest in going, so when I saw Zoma on a list of the best things someone ate in Cleveland during 2017 I suggested checking out the new place instead.

Zoma opened in December 2016 and is the second Ethiopian restaurant in the Cleveland area. I reread my Empress Taytu review before we headed out to the 49-seat restaurant on Lee Road in University Heights. Based on the online menu we weren't expecting alcohol to be available, but the option of Ethiopian Honey Wine intrigued many of us.

Per the menu, Ethiopian Proverb "Drink Tej (Ethiopian Honey Wine) and speak any language in 30 minutes." There were three different options for the honey wines, we selected Tej.

We were expecting more of a mead flavor from the honey wine, but Dave described it more like alcoholic honey juice. The Tej has a thicker mouth feel than wine made with grapes (and no honey), it was sweet without being cloying, overall I enjoyed it. 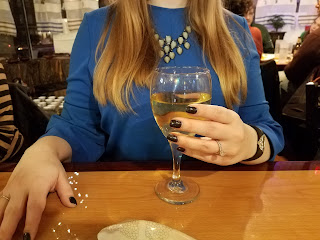 We were told before ordering that Zoma is a fork free, spoon free zone (unless you ask nicely for non-traditional utensils). For us the cultural experience is part of the meal, so we happily used the injera provided with our main courses, more on that below.


To kick off our meal several of us ordered sambusa which is a crispy pastry filled with lentils, onions, and jalapeno served with a chili sauce. The whole lentils inside the pastry made this one a little difficult to eat, because once you took a bite the lentils just spilled out of the pastry. For me, the sambusa would be a pass on a later visit even though the flavor was good. 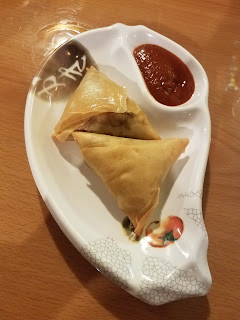 For dinner Dave and I selected Veggie Combo #2 which allowed us to select four of the vegetarian items to create our own combination platter. Clockwise from the bottom: Split Yellow Peas; Chickpea Stew; Collard Green Kale; and Split Red Lentils.

All of the meals are served with injera bread (what is under the vegetable dishes as well as surrounding the plate). The injera is used as an edible utensil for scooping and picking-up the food as well as the sauces. 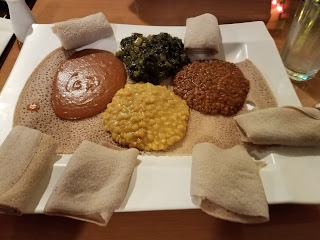 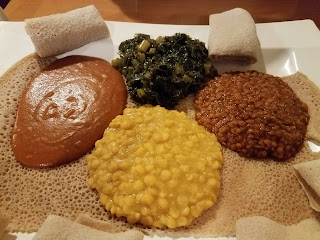 For Dave and I, this combo was the perfect size. I left feeling full and Dave finished off all of the injera bread along with any of the veggies that I was unable to eat.

Others at the table ordered the Mild Beef Stew (pictured below); the Zoma Special Kitfo which was beef tartare seasoned with sauce and then served with cottage cheese and kale; and the Beef Tibs. 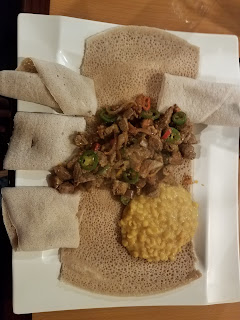 Everyone was happy with the price, the amount they received per portion, and the flavor of their meal.

One thing not noted on the menu is that Zoma will only do the Ethiopian Coffee Ceremony during certain hours on Sunday afternoon. That was something we loved about Empress Taytu, so we asked if they would make an exception for our large group of nine people. They happily said they would roast the coffee beans in the traditional way and prepared a large jebana (traditional clay coffee pot) of coffee for our table at the end of the meal.

Pictured is a jebana and the coffee bean roasting station. 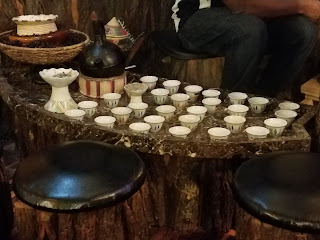 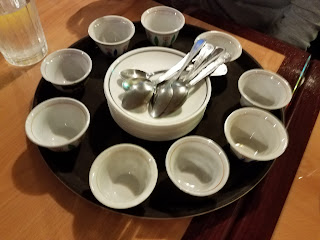 Cheers to a successful meal with friends at Zoma. 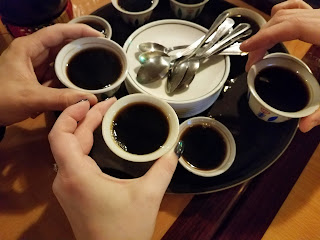 Those of us who had been to Empress Taytu and other Ethiopian restaurants outside of Cleveland enjoyed the authenticity and flavorful food at Zoma. It's close to the home of some of our friends and  I anticipate they will be checking out Zoma again soon now that they've had a glimpse into some of the menu offerings. All of our friends who had never been to an Ethiopian restaurant enjoyed the experience and the hospitality of Zoma as well. It's certainly a place I will recommend to people in the future and invite guests to as a must-see-restaurant in Cleveland.

Due to the small size of the restaurant, it's probably best to make a reservation for large groups and at peak times. We were at Zoma from about 6:30 last night to around 7:30-7:45 and there were smaller groups of two people who walked in at points during the meal, but our large group wouldn't have gotten a table nearly as easily without a reservation.

Everyone, especially Dave, was happy with the price as well. For all of the food we ate, the prices were very reasonable for the quantity and quality. Dave said that we spent less than we typically do on a night out, since we were able to share our large Veggie Combo which cut down on us ordering two meals. 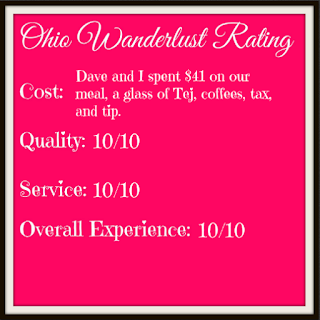