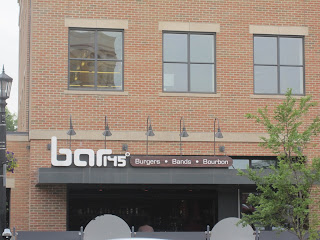 Bar 145 is one of our favorite restaurants in Kent, Ohio. It's located on Erie Street in Kent's new downtown area -- there's plenty of restaurants, coffee and shopping downtown to keep you busy if you'd like to make an afternoon or even a full day out of visiting Kent. Due to the high volume of quality places and festivals that take place downtown, I will be reviewing many places in this area. 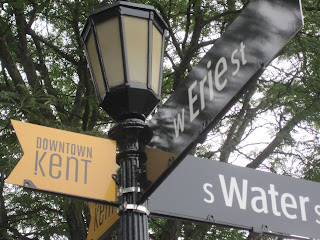 The Kent location offers a patio and although the weather was beautiful, the red umbrella above us added a tinge of red to some of my pictures.

In order to participate in the build-your-own burger, you simply fill out the provided slips like Dave is doing below. 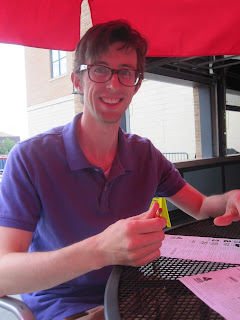 The slip will also let you know what is a little extra -- I paid an additional amount for adding cherry chutney as well as a side order of fries. 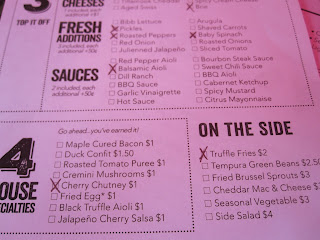 The  combinations are endless. Bar 145 offers four burger options, beef, chicken, black bean and skip the patty. You can customize your bun or choose to have your burger served over a salad. You choose a cheese, three fresh toppings, two sauces and any house specialties that you'd like to add.

We've been to Bar 145 many times and I have never been disappointed by the burger I've created. The house specialties list does change occasionally, but for the most part the burgers,cheeses, toppings and sauces seem to stay the same.

Once we placed our order for burgers, we received the Cookies and Cream martini and Flirtini that we had ordered. I regularly order cocktails at restaurants, so I was pretty happy to only pay $5 for this martini. There were several beer specials as well, but since Dave opted for a martini as well, I put those out of my mind. Both martinis had good flavor and were well worth the price. The martini and cocktail list does rotate seasonally, so you'll need to check the list before you go to make sure your favorite drink is still available. 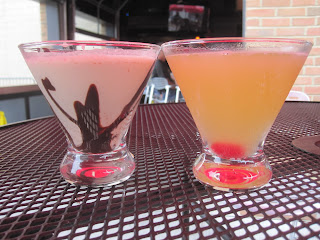 We had not planned on ordering an appetizer, but were enticed by the happy hour deal which meant that certain appetizers were half off. We split the Bavarian Pretzel Bites which consisted of warm pretzels severed with a cheddar and Dijon fondue.

Both of us enjoyed the pretzel bites, they tasted good and paired well with the sauce. I don't think there's any way that you could possibly use all of the cheese sauce that you're served, Dave actually held onto it once we were done with the appetizer and dipped his fries into it in order to enjoy it a little longer. 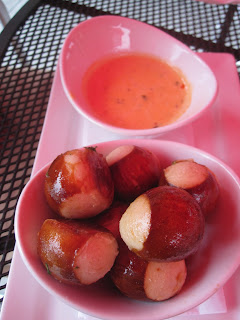 Part of the way through our visit an employee came out and lit the fire pit behind us. This was a nice touch to the ambiance of the patio, we were eating pretty early though, so it would have been even better to have the fire pit near you later in the evening. 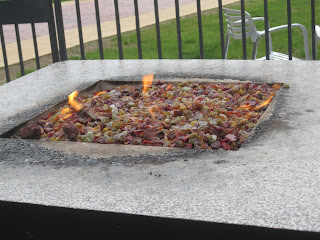 I opted for the foccacia, because whenever I order a burger all of my toppings fall out and I lose part of the bun anyway. I thought it might be easier to try to eat it with a fork instead. 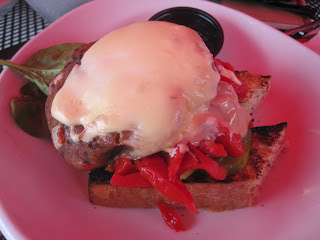 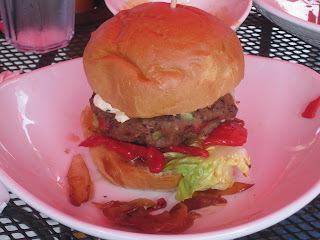 We both enjoyed a side of fries with our burger. The french fries at Bar 145 are the best french fries I've ever had. They are seasoned with rosemary and topped with truffle oil -- you do not want to miss out on the red pepper aioli that accompanies them either.


Enjoying some of the quaintness of Kent after our dinner. 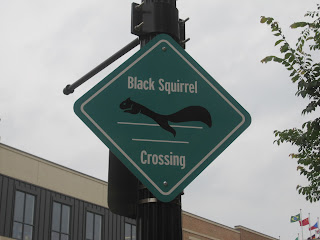 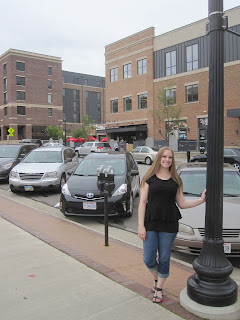 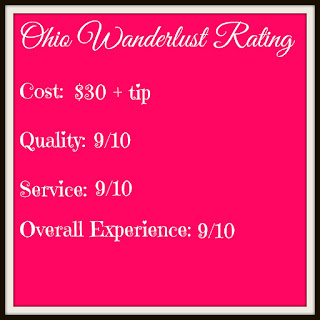