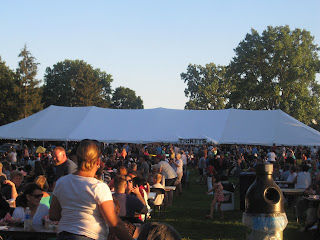 Last night was the Taste of Akron which kicks off the three day set of events hosted by the Akron Arts Expo. Tonight is the Summer Uncorked Wine Tasting and tomorrow is the Akron Arts Expo Concert. All three events are hosted in Hardesty Park.

Unlike the Taste of Tremont, the Taste of Akron operates on tickets. You pay for the tickets at the beginning, by cash or credit card and then use those tickets to purchase food from vendors. Each ticket is $2, we bought fifteen tickets for $30 and used all of our tickets in sampling from the vendors.

The Taste of Akron vendors:

Food Trucks:
** locations are vendors that we sampled last night at the Taste of Akron.

The first sample we had was a Vegetarian Momo from Three Sister's Momo (a momo is a dumpling). I thought that this sample was good, the filing was flavorful and they were well cooked. These were spicy. Dave thought it was a nice one ticket item, because it wasn't something that we had tried before and we were able to get a nice taste of what Three Sister's Momo had to offer. 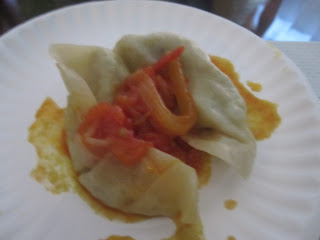 The next sample we had was a Michelada Tofu Taco from Nuevo Modern Mexican and Tequila Bar. I wouldn't be fully transparent if I didn't state that Dave and I are already huge fans of Nuevo. We love going to their restaurant in Akron and were excited to see them at the Taste of Akron. I love this taco, it was full of flavor and is not something that I have seen on their menu before. It was also a huge portion for only two tickets. Dave and I really liked this taco and are planning a trip to Nuevo. 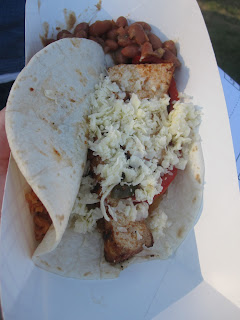 Next up was D'Agnese's and we tried the Feta & Watermelon Salad. I liked the combination of the feta and the watermelon, but there was a lot of red onion in this and I didn't want to taste red onion for the rest of the evening, so I kind of picked around it. I did like that they served these in a resealable container, we were able to get the sample and hold onto it easily as we went to different vendors. Dave liked how fresh this was and said it was nice to veer away from the other food offerings which were pretty rich. 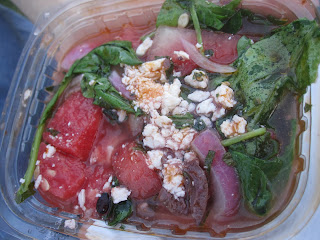 Cheddar & Potato Pierogis from the Pierogi Lady. I already talked about the Pierogi Lady during my Hartville Flea Market post, but I can't rave about her enough. She had five different types of pierogis available at the taste of Akron (I don't eat meat, so I had to skip out on four of the offerings) and she always delivers a wonderful serving of pierogis. Dave and I can't visit a Taste without a stop to the Pierogi Lady, she's a festival staple for us. 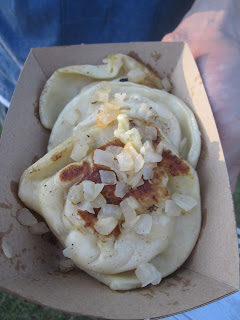 Fleming's Prime Steakhouse served Augratin Flemings Potatoes. I'm lucky that I got a bite of these potatoes since Dave enjoyed them so much. The blend of cheese which Flemings uses is great, you can taste several different types of cheese and they are just covered in the cheese. The leeks that are in the potatoes give them an onion-like flavor. We really liked these, the dish was pretty much all the same texture and didn't photograph well, but it tasted good. 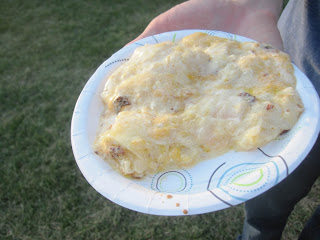 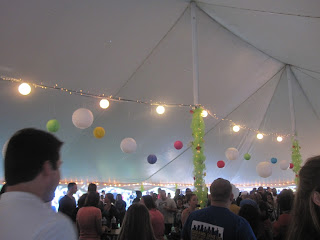 The band Get On Up played throughout the evening, they were great! There was a large group of people watching the band and dancing to the music. 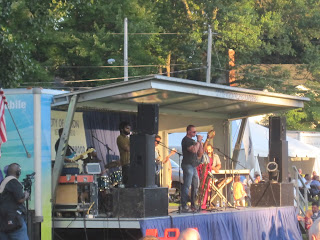 The food truck vendors were in a different location than the other vendors, they were across the park, with the main stage separating the two food vendor locations.

Our first stop was Southern Thangs, we had tried their Deep Fried S'more last year and wanted to sample it again. 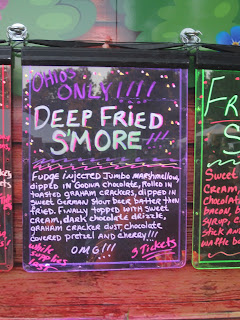 Messy perfection. The Deep Fried S'more is quite a bit of dessert. I personally like the batter the best, the beer batter + graham cracker + Godiva chocolate really makes this something special. This is a messy sample though, Dave and I struggled with eating it, I wish I had picked a knife up from one of the other vendors, plastic forks made this one a struggle. 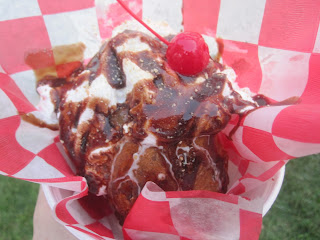 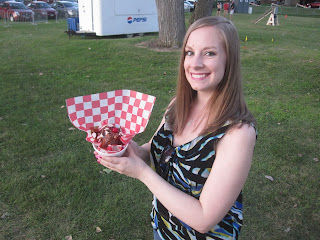 We had tried the Popsmith last year at the Taste of Akron and think it's such a cool concept. The Popsmith travels around around to various festivals and sells popsicles in a variety of combinations. Here's the menu from last night. 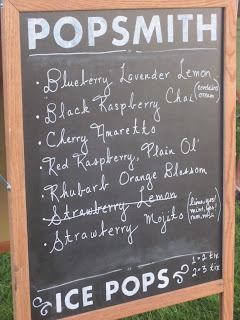 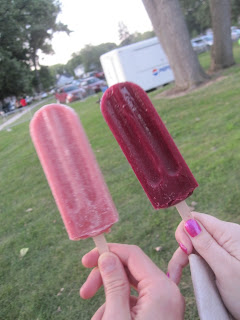 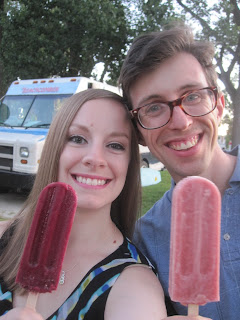 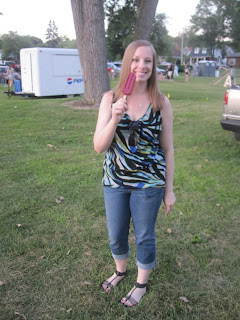 Final thoughts on the Taste of Akon. Although parking is a little crazy, this year there were locations roped off in Hardesty Park in addition to street parking, we easily got a spot in the field and were able to leave without incident. There was an incredibly long line for tickets, but since they had three lines, two for cash and one for credit card, we were able to by pass the long lines and pay for our tickets by credit card which was convenient. I really prefer dealing with tickets over dealing with cash, I'm not sure if I just think it's more fun or if it makes me feel like I'm not really spending money, but I enjoy that aspect of the Taste of Akron.

I really dislike the set-up of this event. All of the vendors are located under a large tent, some vendors line the left side, others the right side. As a result, all of the lines butt up against each other, it's difficult to tell where the line ends and which line is which. All of the vendors have long lines and due to all of the people trying to navigate through the tent it's difficult to stand in line to wait, because you're constantly being jostled by people on the move. I really wish that they would use two food tents, that way even if the lines are long, the lines of people won't be backing up into other food lines and there will be less people trying to weave through the lines to get to other vendors. 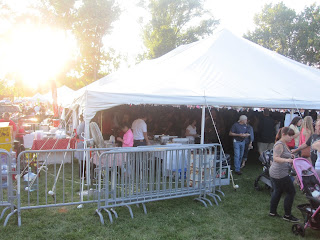 Additional thoughts about the 10th Annual Taste of Akron.

My rating for the Taste of Akron: 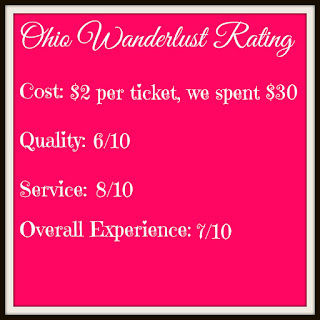