By Alecia - March 13, 2016
Last Saturday we made the mistake of trying to go to dinner in Canton without any reservations. Every where I called couldn't get us in for several hours, and we really needed to find somewhere to eat prior to an event starting at 8:00. Luckily, the Canton Brewing Company only had about a twenty-minute wait for a table and none of us had been there before, so we were happy to try something new as well.

During the wait we went downstairs to explore the Speakeasy Tap Room.... 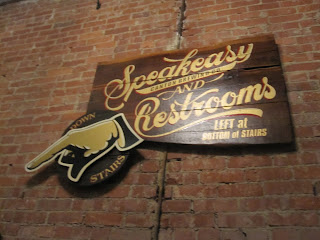 The four of us were impressed with how large the Speakeasy space is, there were quite a few people down there enjoying pizza and even a large birthday party group that had set themselves up in one of the corners. 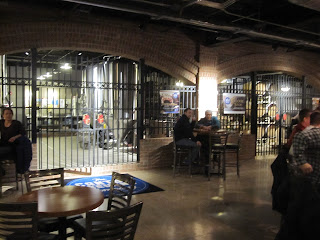 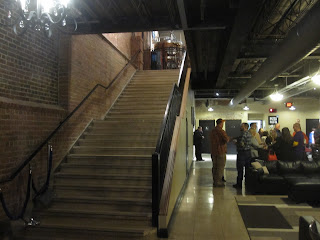 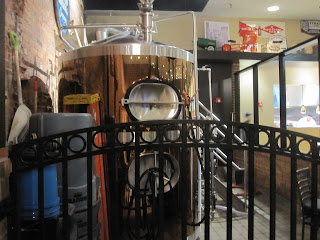 The restaurant upstairs also is a lot bigger than most places we've been in downtown Canton, but with the addition of the Speakeasy downstairs the space is absolutely huge. 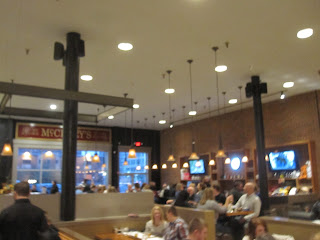 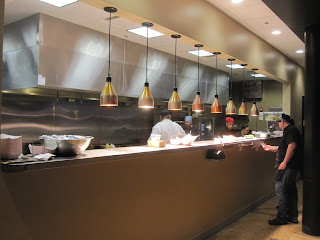 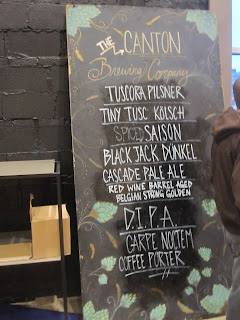 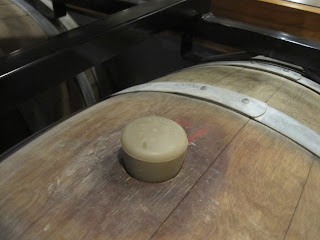 Overall, twenty minutes was probably a pretty accurate estimation of how long we waited for a table. Dave really enjoys beer, so he was excited to order a beer flight to try some new things.  He selected (from left) the Spiced Saison Ale, Cascade Pale Ale, Carpe Noctem Coffee Porter, and Imperial Stout.

Daves favorites were the Cascade Pale Ale and the Carpe Noctem Coffee Porter. He said that it was fun being able to sample a couple different fresh, local beers since he had never tried any of the Canton Brewing Company brews before. 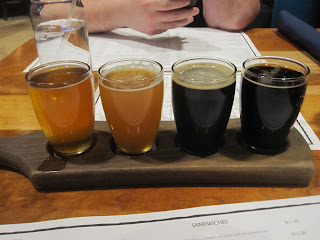 I am not a beer drinker...so I went with the Dandy Shandy which was half Saison and half house made sour mix. I thought the cocktail was pretty refreshing and even though I'm usually a non-beer drinker, I was okay with drinking it. 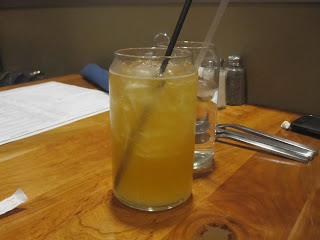 For dinner, Dave and I split a few items, the first was the Roasted Vegetable Taco described as "grilled mixed vegetables on a Napa cabbage shell and topped with balsamic glaze." I loved this tacos, they were loaded with a variety of grilled vegetables and overall it just made for a really nice small dinner or appetizer. The tacos were messy, but these were my favorite item that we ordered, I liked that I was getting a meal that felt fresh, but wasn't a salad. 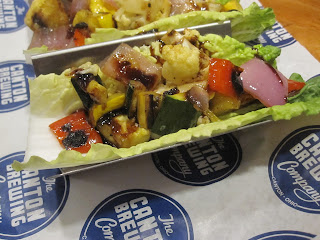 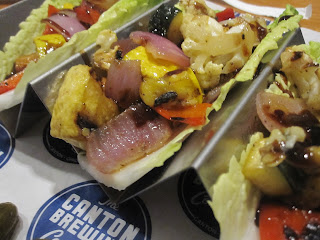 The Fried Mac & Cheese bites, pretty self-explanatory, the sauce on the side was some sort of mustard sauce and it paired nicely with the mac and cheese bites. 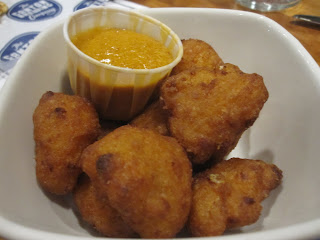 And the Grilled Sweet Potato Sliders described as "sweet potato with a curry, brown sugar rub, romesco sauce, crispy onions, and spinach on slider buns served with kale chips." I thought these sliders were pretty creative, I wouldn't have thought to prepare a vegetarian slider using a piece of grilled sweet potato. Overall, these ended up being Dave's favorite item that we tried. As popular as kale has been in food trends, I'm not sure that I've ever had kale chips at another restaurant. 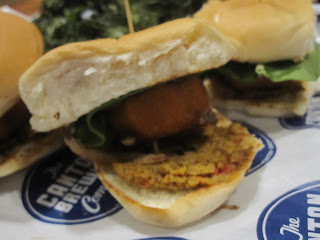 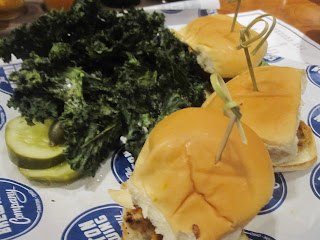 This isn't even a small view of the menu, there were many other appetizers, salads, and sandwiches for both vegetarians and carnivores. I was happy with the versatility of the menu, in the ten years that I've been a vegetarian, I've never been unable to eat in a restaurant, but without a decent variety of meatless choices, sometimes that means all I can eat is a salad or some side dishes.

The Canton Brewing Company won me over with dessert too, this Buckeye Pie was too difficult to resist as a big peanut butter and chocolate lover. 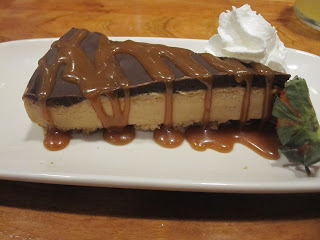 Everyone in our party left full and happy. Our server Kaitlin was very professional and helpful when it came to navigating our options on the menu. A twenty-minute wait on a Saturday night isn't bad at all when you consider that other restaurants in the area were telling us that it would be two hours or longer to get a table for four. The sheer size of the Canton Brewing Company location makes it easy for them to hold a large number of parties, which is convenient considering how small most restaurants in downtown Canton are size-wise. Dave loves trying new brews and I know this is a location that he would love to show off to family in the future whenever they come to visit us in Ohio.

There are a few downsides to the Canton Brewing Company that didn't quite effect our experience, but are worth mentioning. Currently, they are only open for dinner Tuesday-Saturday. If I worked in Canton I would consider this a great lunch location due to the size of the restaurant and the variety of menu items. I think Sunday hours would be nice addition as well, we enjoy checking out wineries and breweries on weekends, and sometimes a lazy Sunday afternoon is the perfect time to do so. Lastly, I cannot find their menu anywhere online...I know that shouldn't bother me, but in the age of social media, I like to be able to find a menu on Facebook or a website so that I can check things out before visiting. I was glad that there were a lot of vegetarian options on the menu, but had there not been a nice variety, I would have been bummed that I couldn't have found that out before going.

My rating for the Canton Brewing Company: 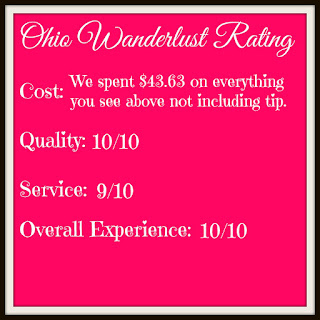