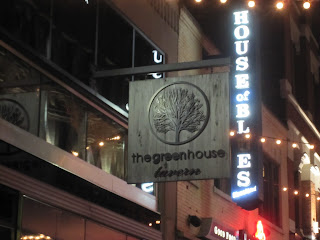 Friday evening Dave and I took a trip up to Cleveland to celebrate our anniversary. We had a gift card to the Greenhouse Tavern located on East 4th St (thanks Sara and Matt) and thought it looked like a wonderful restaurant for date night. I made a reservation one week prior to us going out and was already impressed with the staff. I received a phone call Thursday afternoon to confirm my reservation and to find out if we had any food allergies, aversions, or dietary restrictions. They also asked if we were having dinner there to celebrate anything.

When we arrived Friday evening our server, Kevin, was prepared to guide us through the vegetarian menu items and was already aware that we were there to celebrate our anniversary. Those special touches really help to elevate the dining experience. Greenhouse Tavern's menu is divided in five courses, you can choose to work your way through all five courses for a set price or mix-and-match items. The course that an item falls into is also a pretty good indication of the portion size, as the portion increases based on which course is being served. 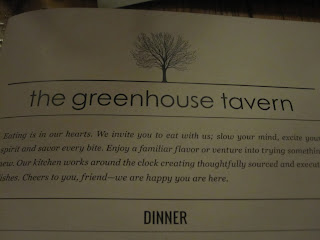 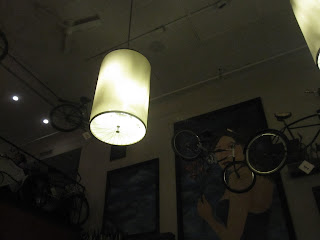 I started off the meal with a champagne, Cointreau, and bitters cocktail. 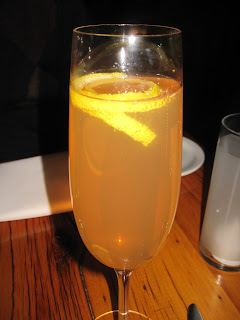 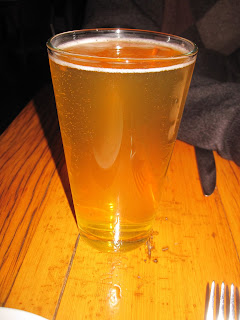 Rather than starting with an appetizer off of the First Course list, we decided to split an order of Pomme Frites which are served with "raw garlic, rosemary, and aioli." We enjoyed starting our meal with the Pomme Frites, it was a nice sized portion to whet our appetites for the next course, but full of enough flavor on its own for us to thoroughly enjoy them as their own course. 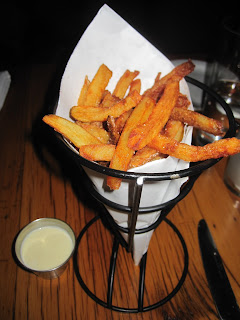 For dinner, I ordered off of the Thirds portion of the menu and selected Bates Farm Heirloom Greens Rigatoni, which was recommended by Kevin, the Rigatoni is house made and served with "house vinegar, Mackenzie Creamery goat cheese, modern egg, and black walnuts." Since this came off the Thirds portion of the menu, it was a nice sized dinner plate. I think everything paired well together and I can see why Kevin recommended this as one of the most popular vegetarian dinners. 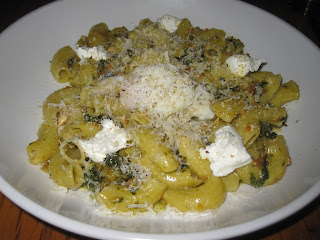 Dave chose from the Seconds portion of the menu, so his portion was slightly smaller than mine. He chose the Gnocchi Sardi, also made in house daily. This gnocchi is unlike the potato dumpling you might be used to seeing, Sardinian gnocchi looks more like a small pasta shell. The Gnocchi Sardi was served with "menage a squash, caramelized butter, crispy sage, sheep's milk cheese, and toasted pumpkin seeds." This was just as good as the rigatoni, I think the crispy fried sage added a nice touch, complementing the squash. 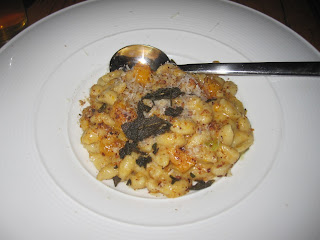 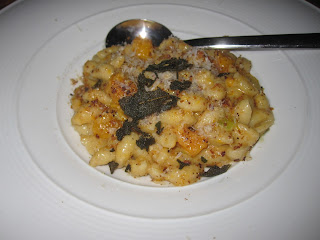 For dessert we selected the Buttered Popcorn Pot de Creme, Kevin brought out our dessert with a candle and wished us a happy anniversary. I think the little touches can really help make a dining experiences and the fact that the host from Thursday passed along the information that it was our anniversary to our server was one of those nice touches. Kevin also let us know that the Buttered Popcorn Pot de Creme was on the house for our celebration.

The Pot de Creme had a thick layer of salted caramel over the top and was simply heavenly. I thought the sweet and buttery pot de creme went so nicely with the salty and sweet caramel on top. I will come back to the Greenhouse Tavern whenever I'm in Cleveland simply to order this dessert if nothing else. 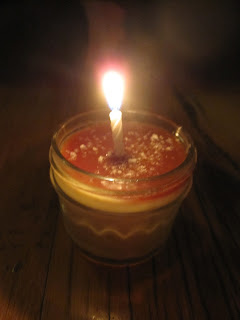 We had a wonderful experience at The Greenhouse Tavern, although the prices are a little more than we would normally spend on a meal, but I certainly don't mind splurging when we're celebrating. Kevin provided some of the best service that I've ever had in a restaurant, he was incredibly knowledgeable, paid attention to detail, and was honest in his recommendations which were all spot on. Everything we ate was of the highest quality and we left full and happy. We will certainly be keeping The Greenhouse Tavern in mind whenever we are in Cleveland. 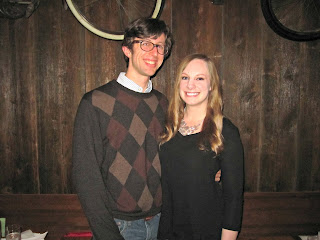 My rating for The Greenhouse Tavern: 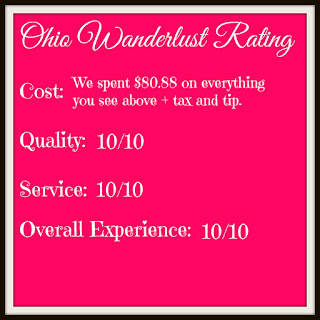