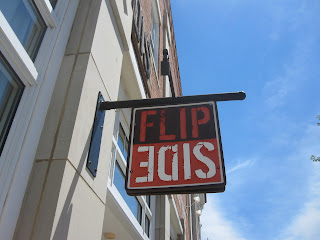 I have a pretty decent obsession with 3 Palms Pizzeria in Hudson, every time we visit the food is spot on, the cocktails are always delicious, and they have a great patio. The owner of 3 Palms Pizzeria also owns two other restaurants in Hudson, coincidentally all three are on the same corner, One Red Door and Flip Side. A friend works for the restaurant group and has been encouraging me to try Flip Side for a while. Now that their Inverted Veggie Burger is back, Dave and I decided to give Flip Side a try for lunch this afternoon.

We were pretty hungry when we arrived at Flip Side, so we ordered an appetizer of Triple Cooked Fries topped with cheese. I thought these were amazing, it didn't take us long to eat the whole plate and it got us both really excited for lunch. 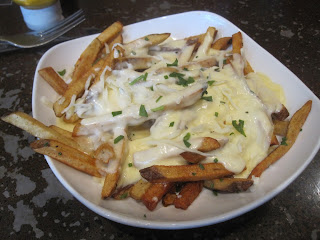 I also ordered the Chef's Shake made with peanut butter, pretzels, vanilla and chocolate ice cream. 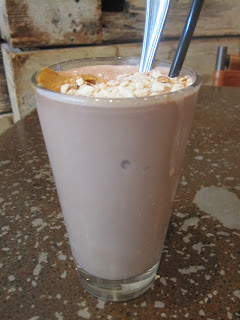 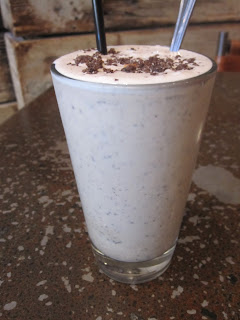 We honestly probably should have stopped ordering at that point, the starter and our shakes tasted great and were really filling, but we pushed on and ordered lunch.

Dave selected the Inverted Veggie Burger, this one isn't listed on the menu, but we saw on Flip Side's Facebook page that it was back at all locations so Dave decided to give it a try. It's a little difficult to tell from the photo, but instead of a bun that's two veggie patties sandwiching avocado slices, greens, and sprouts. Dave said that it was good, he liked the lemony flavor, and the spicy dressing that came along with the burger. 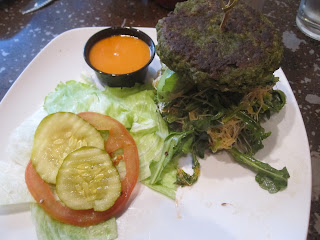 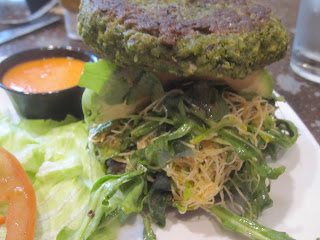 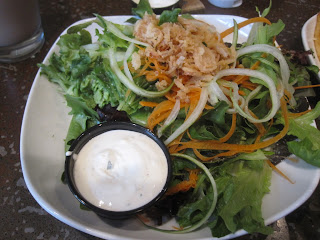 The Mac and Cheese was everything macaroni and cheese should be, the cheese was full of flavor and melted perfectly and the rosemary throughout helped to give the dish extra flavor. Dave really liked this as well, but it was difficult for us to finish it with everything else that we ordered -- I think Dave will be pretty happy to take these leftovers to work tomorrow. 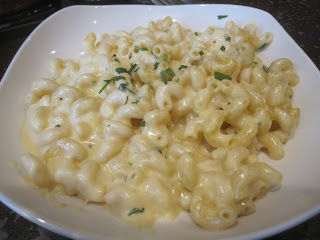 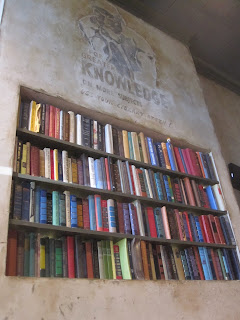 From the moment we walked in we got great service from the staff at Flip Side. Our server Zachary was attentive and friendly. One small detail that I appreciated was that our shakes were made in the back, not at the bar. A blender constantly interrupting conversation is probably most notable at chain restaurants where a variety of frozen drinks are blended at the bar. There were several milkshakes made during our time at Flip Side and I could barely hear the whir of the blender which was much appreciated, because the inside of the restaurant isn't large and the blender would have been a constant annoyance if it was being used continuously.

Neither of us ordered alcohol, but there is a fully stocked bar, all of the shakes can be ordered spiked and suggestions for which liquor to use are made on the menu. The couple behind us ordered Bloody Mary's before we left and were served a massive drink with a lot of garnishes, it inspired a table near us to order a round of Bloody Mary's as well.

My rating for Flip Side: 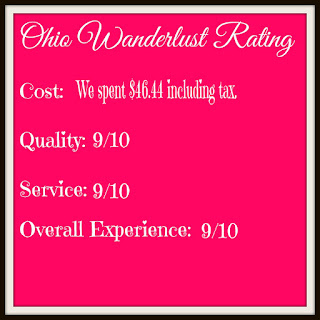