The Yule Ball Presented by Side Quest -- Cleveland, OH 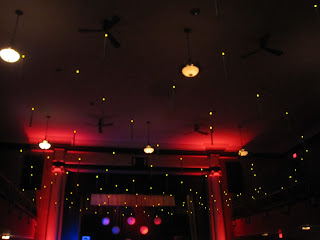 Saturday I attended the Yule Ball presented by The Side Quest at the Ohio Masonic Center. This event sold out months ago and I was lucky enough to hear about it from two friends who hang-out at the Side Quest. Those two friends said that this event was going to be amazing, so I ordered tickets right after finding out the details. For your ticket you received access to the event which included unlimited food, one drink ticket, and live entertainment (along with a host of other magical things).

For those who are unfamiliar the Yule Ball was held in celebration of the Tri-Wizard tournament in Harry Potter and the Goblet of Fire by J.K. Rowling. The entire book centers around the Tri-Wizard tournament, although the Yule Ball is only a small portion of the story, it makes for a fun excuse to dress fancy and celebrate the holidays and Harry Potter at the same time.

Based on the Facebook page for the event I gleaned that the dress was going to be a mix of formal and Harry Potter cosplay. Dave and I decided to dress-up and then wear cloaks over our outfits, other friends decided just to don robes.

Another thing that is important to note about this event is that a portion of the proceeds benefited  All Dogs Heaven from Lakewood, Ohio and The Ohio Bird Sanctuary from Mansfield, Ohio. Aside from just a portion of the proceeds benefiting these great organizations, there were also quite a few items being raffled off and the proceeds from the raffle benefited both organizations as well. $700 was raised for both organizations and Side Quest took that $700 figure a step further donating an extra $300 to each -- at the end of the night All Dogs Heaven and The Ohio Bird Sanctuary each left with a $1,000 donation from the Yule Ball. All Dogs Heaven also had an information table set-up at The Yule Ball and took some direct donations as well. 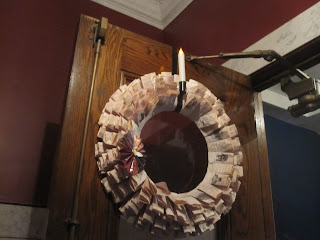 There were several places you could go once inside, the Great Hall had all of the food and musical entertainment, whereas Diagon Alley hosted a few workshops and vendors. 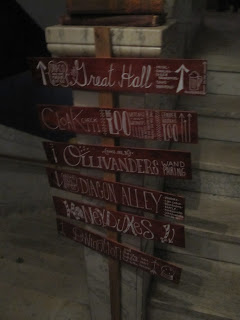 On your way into the Great Hall you could stop and have a consult with three of the available Divinations professors. 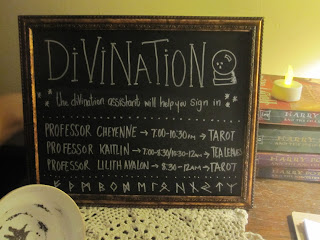 My friend Kaley and I opted for tarot, whereas Dave opted for tea leaves. 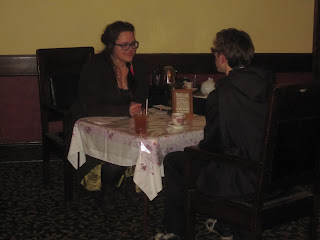 In the same room as the Divination was a photobooth backdrop which we had so much fun using. There were plenty of props to use and always someone else available to take a group picture for you. 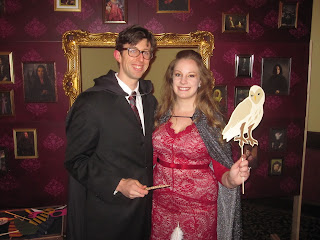 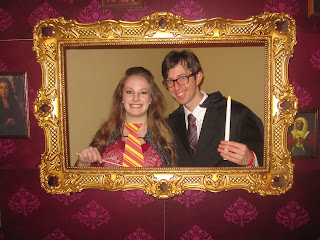 The Great Hall was magical and decorated with "floating" candles just like in the Harry Potter Yule Ball. There were some tables on the lower level and plenty of seats up above since this was an auditorium. 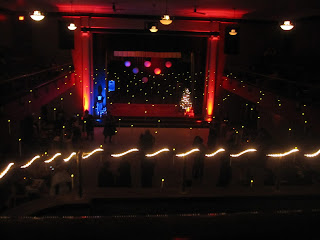 There were three drinks available for the evening -- Butterbeer, Pumpkin Juice, and Minerva's Nightcap. There were also beers and liquors available for purchase. It was much appreciated that Side Quest kept the drink prices pretty reasonable -- all of the cocktails were only $7-$8. According to the Facebook page for the event the Side Quest went through "6 gallons of pumpkin juice, 15 gallons of butter beer, and ... exactly a half ton of ice" at the Yule Ball. 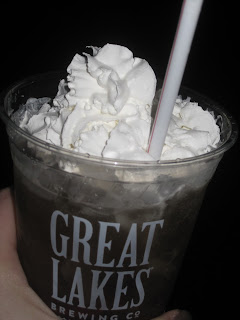 Aside from the bar there was a variety of food available in the Great Hall courtesy of Pope's Kitchen. My favorite part of the food was the roasted potato bar with a variety of toppings. There were plenty of things to graze on all night and they made sure that the food was always refilled immediately. 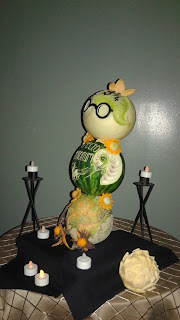 The highlight of the evening for me was Eyelops Owl Emporium -- two representatives from the Ohio Bird Sanctuary in Mansfield giving us a presentation about some of the owls that live at the Sanctuary due to rehabilitation issues that made it impossible for them to be released into the wild.


This is Monty, he's a barn owl. He fell out the nest as a baby and needs to live at the Sanctuary due to some damage he sustained in the fall. 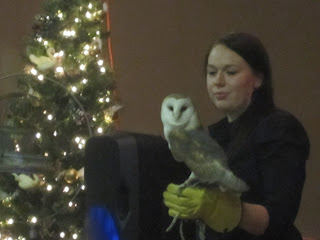 Seymour the Great Horned Owl had to have one wing amputated, but is living a happy life at the Sanctuary. 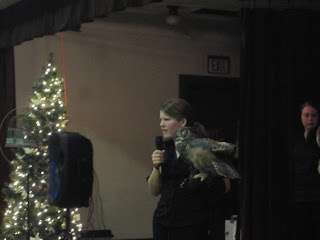 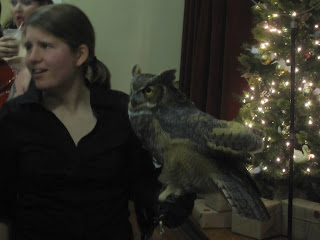 After the presentation we got to take pictures with the owls, this one is blurry, but some of my Facebook friends and coworkers were shocked to find out that these were real owls. Monty gave me a little tap on the head with his wing. 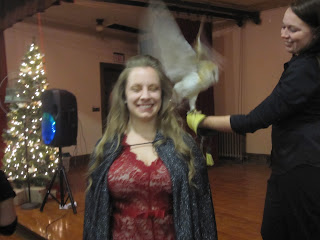 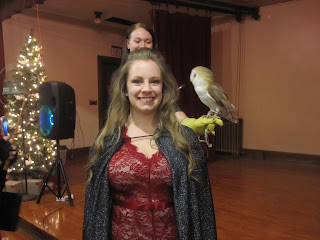 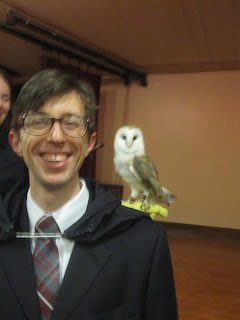 This is Winnie, she fell out of the nest as a baby too and now needs to live at the Sanctuary -- she's a screech owl. There are two kinds of screech owls. She was so ridiculously precious, she kept looking at us and blinking her eyes really slowly, she didn't even look real, just like some adorable cuddly stuffed animal. 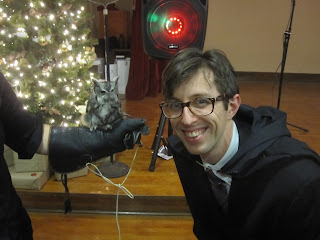 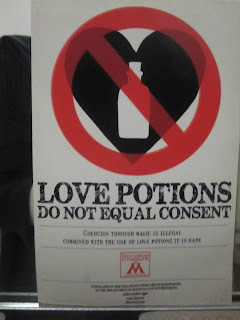 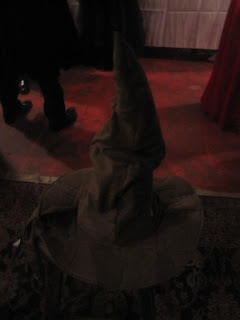 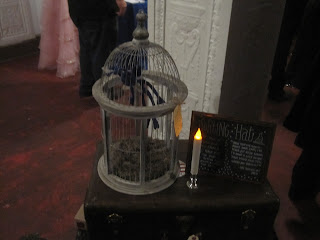 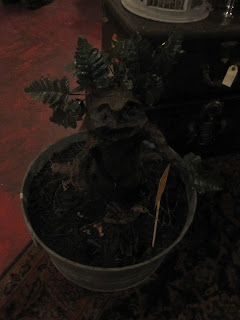 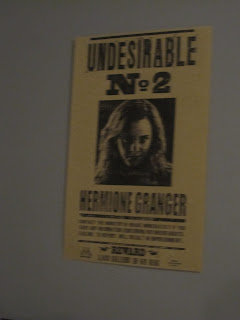 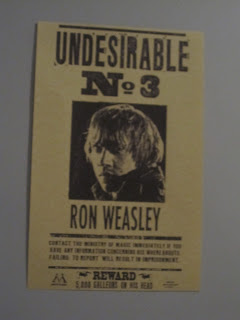 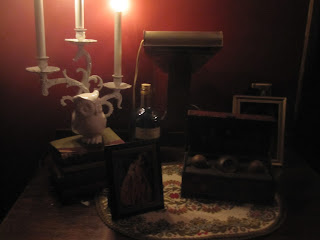 Everyone also had the opportunity to enter Ollivanders Wand shop in small groups to take part in the wand pairing. I have a feeling that this part of the Yule Ball will be coming back in future years, so I won't spoil any of the magic by revealing any details of what exactly went on in Ollivanders. 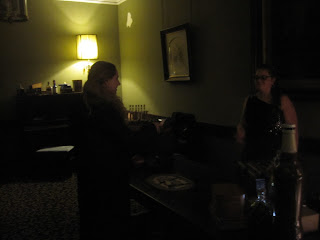 Of the six of us in my group -- two were staying in Tremont for the evening, two were driving an hour and a half home, and Dave and I needed to travel forty-five minutes home. We stayed for about two songs of Draco and the Malfoys before heading out since it was starting to snow lightly and it was already about 11:00. 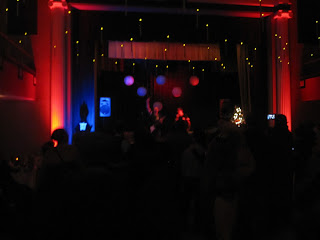 I attended the event with six friends, here are our thoughts on what was absolutely amazing and what could be improved if the Side Quest holds the Yule Ball next year.


Things That Were Amazing and Should Stay The Same:

My rating for the Yule Ball Presented by Side Quest: 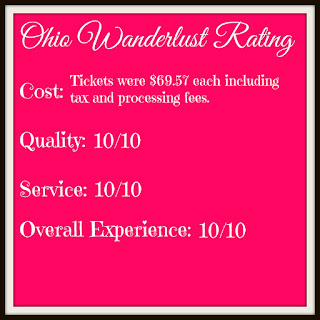