TubaChristmas at the University of Mount Union -- Alliance, OH 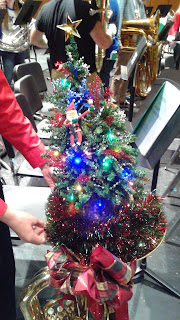 Friday night Dave and I attended the 3rd Annual TubaChristmas at the University of Mount Union. Full disclosure, I'm a 2012 University of Mount Union alumna and I enjoyed four wonderful years as a member of the Purple Raider Marching Band and as a concert oboe. I found out about this event via Facebook, since many of my mutual former band friends were invited. Although I may be slightly biased towards my alma mater and former band, I think we can all get behind a free musical event during the holidays (I should mention that it's free to attend, to participate there is a fee).

When Dave and I arrived on campus we were impressed how many community members were in attendance to enjoy the concert. The audience spanned a wide range of demographics -- there were families in attendance with small children, college students, and elderly couples. 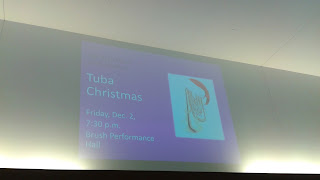 The tradition of TubaChristmas started on December 22, 1974 at New York City's Rockefeller Center. Since that day cities around the world have hosted TubaChristmas events bringing tuba and euphonium players from all over the area to participate. The TubaChristmas event at The University of Mount Union started three years ago when the newest band director Dr. Otis French suggested that the band start hosting one of his favorite events. Now, the event is run entirely by the students who are members of the national honorary band fraternity Kappa Kappa Psi and the TubaChristmas event last night was the largest that has been hosted on campus.

Tuba players from the community and surrounding area are invited to attend an hour long rehearsal of popular Christmas carols. They are also highly encouraged to decorate their tubas to fit with the Christmas theme. After rehearsal there is a free concert with the tubas playing through the Christmas carols with the audience joining in for a sing-a-long during the second verse.

Although TubaChristmas events usually take place outside, the event at the University of Mount Union was inside the brand new Brush Performance Hall. Unfortunately, I only had my cell phone to take pictures, my camera has much better zoom. 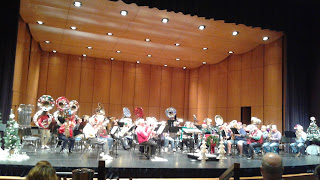 Songs included: Deck The Halls; Good King Wenceslas; and Joy to the World among others. 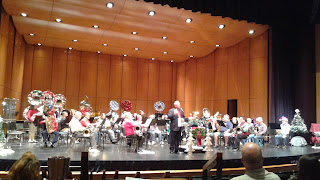 There were Tubas with bows, light displays, and mini Christmas trees. The tuba below won best decorated for the event. 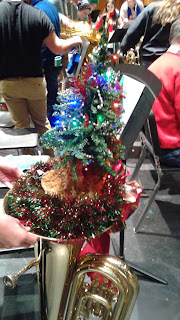 Thank you to Dr. Otis French and the members of Kappa Kappa Psi: Iota Lambda for hosting such a fun community event. Paula Kyser, on the far right, is currently President of Mount Union's Kappa Kappa Psi chapter and put a tremendous amount of work into organizing this event.


Dave and I are excited to attend TubaChristmas at the University of Mount Union in the future to see how the event grows. The holidays are such a busy time, but it was so much fun to sit down and enjoy TubaChristmas -- two of the best parts are that it's not a lengthy program and it's free!

My rating for TubaChristmas at The University of Mount Union: 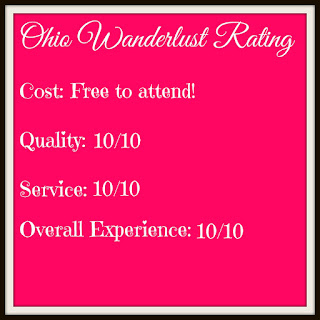