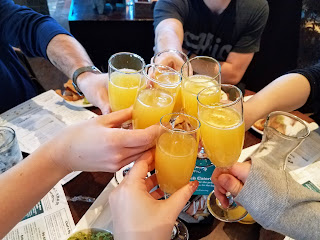 This past weekend we went out with friends to several different restaurants and events in the Cleveland area and had a blast. Sunday morning we ended our time together with brunch at Paladar Latin Kitchen & Rum Bar in Woodmere. In 2007, Paladar opened in Woodmere -- now the restaurant group has four other location across the U.S. and has a sister concept named BOMBA Tacos in three Northeast Ohio locations. With a group of six people sometimes it can be difficult to agree on a place that suits everyone's tastes, but due to the number of offerings on the brunch menu we had no issue finding something everyone wanted at Paladar.

Brunch is served on Saturday and Sunday from 11:00 a.m. to 3:00 p.m. We arrived pretty early in the morning with our reservation being at 11:30, by the time we left at 2:00 the restaurant was pretty full. I would highly recommend making a reservation if you plan to go to brunch with a large group.

We started off with a round of classic mimosas and an order of the traditional guacamole served with the housemade blend of plantain, malanga, and corn chips -- cheers to Sunday. 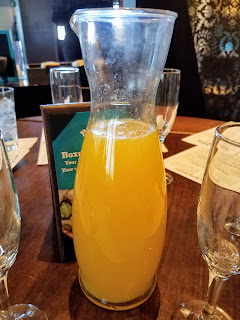 After we finished the classic mimosas several of us ordered the Blackberry-Thyme mimosa, it was delicious and only $3 which is a steal compared to other places we've had brunch. Other cocktail orders included the Paladar Rum Punch and a Bloody Mary. 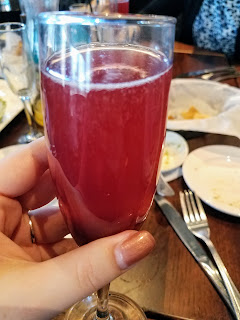 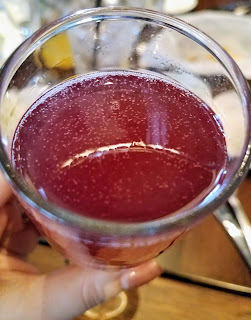 Dave noticed that a Latin Bread Basket was listed under sides and really wanted to order one for the table -- it included Brazilian cheesy bread, yucca cake, seasonal donuts (sweet potato this time), and churros. We passed the basket around our group so everyone could try everything, the Latin Bread Basket was a a hit at our table and inspired most of us to order pastries for dessert later on. 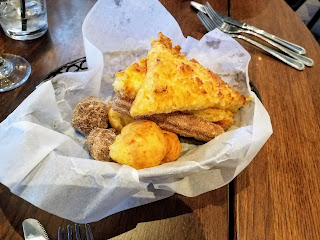 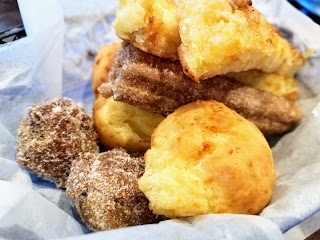 Two of us ordered the Huevos Rancheros which was pretty standard as far as ingredients. I really appreciated how crisp the tortilla stayed even though it had a lot of ingredients piled on it. For my other cilantro haters out there, it could easily be ordered without the extra cilantro. 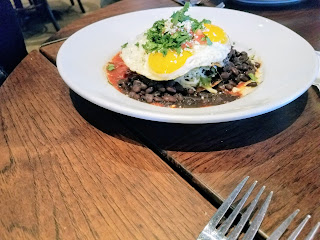 The Americano was made with two eggs any style, and bacon. It was the sweet potato plantain hash and yucca cake that helped elevate it with Latin flair. 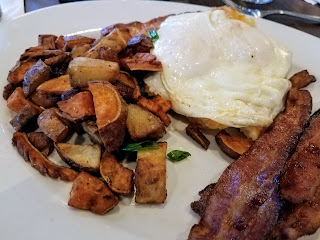 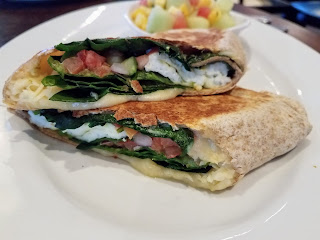 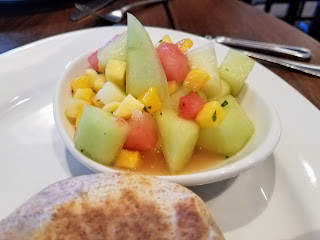 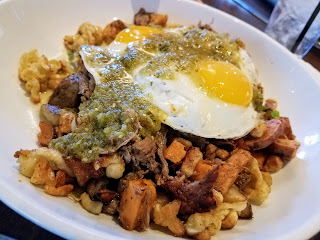 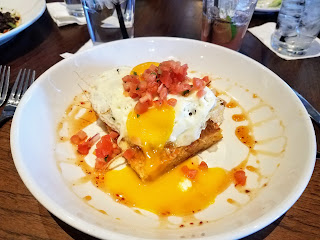 After all of that food we probably could have skipped dessert, but the Latin Bread Basket was so good all three couples decided to split something.

Dave and I ordered the Sweet Potato Donuts served with a Coffee Caramel Dipping Sauce. 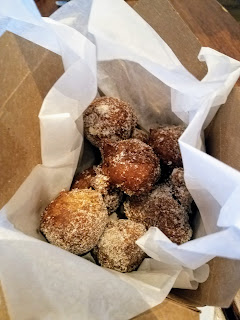 Other friends ordered the Paladar Churros with chocolate and marshmallow sauce. 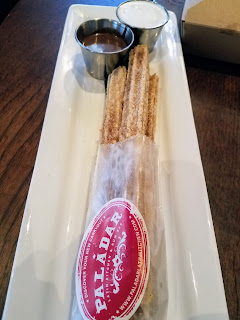 And the Mexican Chocolate Natilla (natilla is Spanish for custard) made with dark chocolate custard, spiced almonds & caramel sauce. 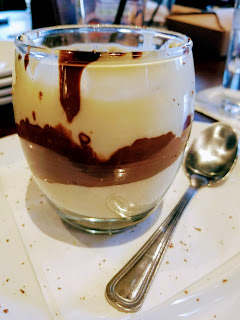 At the end of brunch my friend's boyfriend declared 10/10 for purposes of the blog (he has this down). All of us were happy with our experience -- the mimosas were refreshing, the meals were good and well priced, and the dessert was the perfect amount of sweetness to end our Sunday morning. After such a good experience we're making plans to go back some time soon for dinner, the build your own guacamole is calling my name. 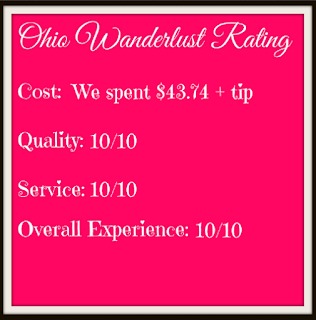