TownHall is a hip restaurant in Cleveland's Ohio City neighborhood touting a menu of "sophisticated swill." Although TownHall was already on my radar due to their menu being vegetarian friendly, we got the push to actually go check out the restaurant from Dave's sister who lives in LA who sent us an e-gift card for Christmas after searching for vegetarian friendly restaurants in the Cleveland-area. After I scoped out the menu we opted to make the drive to Cleveland on a Monday night to check out the special Vegan Night Menu (available Monday night only). The regular menu is still available during Vegan Night as well, so if you're craving something different, you can still order non-vegan items.

Being that I'm not a city person, I'm always worried about what the parking situation will be like when we want to go somewhere in Cleveland. We lucked out last night getting a spot pretty much in front of TownHall. Since we arrived a little after 5:00, it only took fifty cents to feed the meter for the hour until 6:00 when the meters stop being used.

The hostesses were incredibly friendly when we entered TownHall and we were promptly seated at the end of a large, family style communal table. During the hour and a half we were there, no one was seated next to us though.

To start our meal Dave ordered a Sam Adams Belgian Session Nitro from the Brew List (which he described as drinking bread dough, but in an enthusiastic way which led me to believe he thought that was a good thing) and I ordered the Vigor smoothie described as "dragonfruit + raspberries + strawberries + reishi/enoki + c2O + YOGURT + lime | anti-fungal+essential mineral."

I have a problem ordering things at restaurants and not bothering to look up the ingredients...which is how I ended up with a smoothie that includes mushrooms and mushroom powder, but I digress. The smoothie had a slight sweetness to it, but overall the enoki and dragonfruit gave it a sour after taste. Probably not my favorite, but it was good for me. 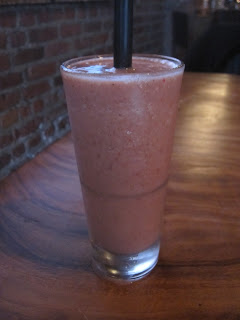 Dave and I decided to tackle the Vegan Night menu head on and order two appetizers and two entrees. 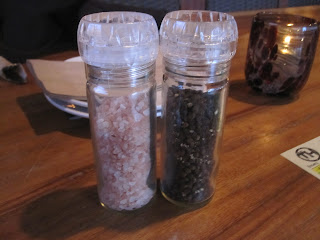 Dave struggled to believe that these were actually jalapenos, because they were really large peppers. They certainly were jalapenos, and they had quite a kick to them. The TownHall vinaigrette was pretty sweet and helped temper the spicy jalapenos. 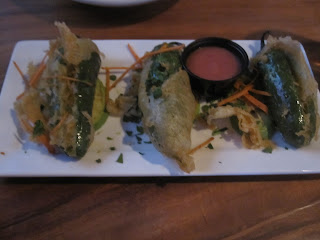 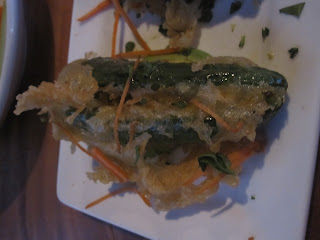 We also ordered the Crispy Tofu Wings "Choose: Korean BBQ -or- Spicy Buffalo Sauce | matchstick celery + carrots." I'm not sure why these made me so irrationally happy, but they did, maybe because I haven't had wings in over ten years since becoming a vegetarian? These would have been nice with some ranch or blue cheese, but that would have killed the vegan vibe we had going on.

Dave and I liked both appetizers, but the Crispy Tofu Wings were our favorite. I would love to try the Korean BBQ next time. 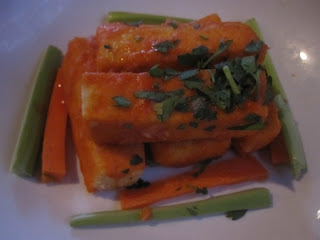 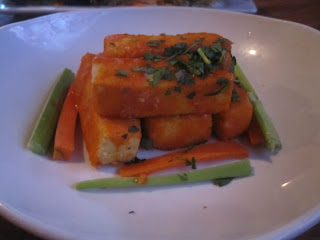 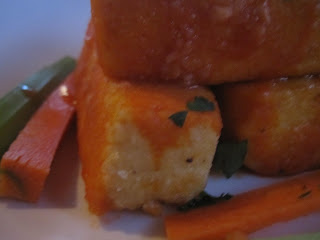 For dinner we were both intrigued by tacos on the menu, I went for the Beer Battered Avocado Tacos "chia seeds | black bean + corn salsa | cilantro-lime vin. | vegan cheese."

Each taco was small, probably about three bites, but paired with half of two appetizers and a side of fries the portion was plenty. The fried avocado was lovely, and I enjoyed every bite of these tacos. 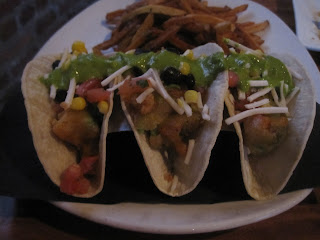 Dave ordered the Sweet Potato + Cashew Tacos "charred corn | black beans | smashed avocado | pico | house harissa | vegan cheese." These tacos were great as well, there was a sweet element in them that must have been part of the harissa, but it helped to round out the flavors. 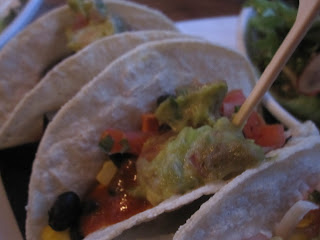 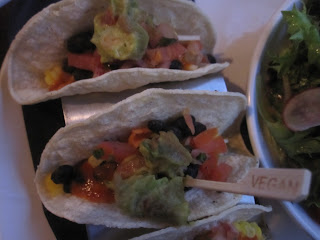 What's dinner without vegan dessert? TownHall offers a different vegan dessert every Monday, they also have a vegan brownie sundae on their menu made with vegan salted caramel ice cream from Mitchell's and vegan whipped cream. Dave didn't love the brownie, but I really enjoyed it's crispy texture paired with the ice cream. Both of us enjoyed the ice cream, if I hadn't been told that it was vegan, I may have never known. 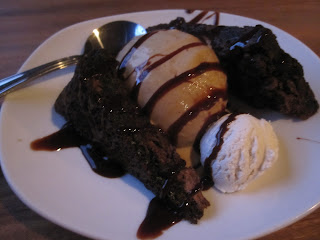 Our server Jessica took excellent care of us and was attentive throughout the evening. She was knowledgeable about the menu and helped us figure out how to pay with the e-gift card which was on my phone. From start to finish, we were nothing but impressed with our night out at TownHall. A co-worker had great things to say about TownHall's brunch, so we will need to make a second trip during brunch hours to check out that menu, but for now, we'll be recommending Vegan Night to our friends and co-workers. Neither of us is vegan, but as a ten-year vegetarian and a two-year vegetarian we had a blast at TownHall eating off of the Vegan Night Menu.

My rating for TownHall: 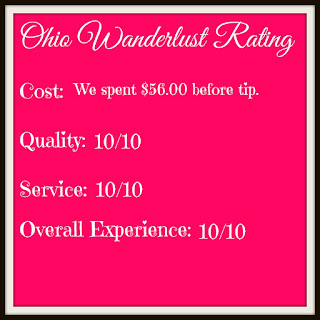