By Alecia - June 18, 2016
I wasn't at all familiar with the background behind the creation of LaureLive when I purchased tickets in January, I was only purchasing them because Andrew McMahon in the Wilderness was listed as an act -- fun fact I've driven to Cincinnati, Columbus, and Detroit to see his bands, so Cleveland wasn't a reach at all. From January until June I followed the LaureLive Facebook page and learned more about the concert as well as Laurel School.

Laurel School was founded in 1896, is a nationally recognized, college preparatory, independent day school for girls. The main campus is located in Shaker Heights, Ohio and the 140-acre Butler Campus in Russell Township, Ohio, is where LaureLive was held. Laurel's mission is "to inspire each girl to fulfill her promise and to better the world."

Laurel promised the festival would be one of a kind, a weekend long "music, arts and culinary festival" which promised to be appropriate for the entire family.

Tickets were available for Saturday, Sunday, or both. There were also VIP experience tickets available which provided VIP holders with complimentary food, private viewing at both stage areas, as well as some nice shady seating. 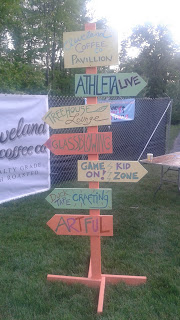 One thing that I appreciated about LaureLive was the shuttle system that was set-up, parking was available at many of the local school districts and concert goers were bused to the venue. At the end of the evening you just went to the shuttle location for the school you parked your car at and then you were bused back to the start. This really helped prevent the bottleneck that occurs at most large events. 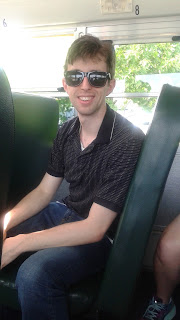 Once we arrived at LaureLive we went through security which is one issue I had with the day, I see now that the LaureLive FAQ's page states that all metal aerosol cans are prohibited, but the day before the the event started I checked that page and there was only a mention of spray sunscreen being prohibited. So long my bug spray cannister!

Aside from getting my bug spray confiscated and thrown in a massive pile, getting through check-in was easy. Everyone was given a cloth wristband to wear throughout the event -- the wrist bands were color coded and denoted everyone's status and perks level -- as the red wrist band holders we were the general admission for the Saturday event only. I'm not sure by what witchcraft these bands worked, but we were told that once we put it on our wrist it would not be adjustable and they were correct it was stuck in place once the cord was pulled. 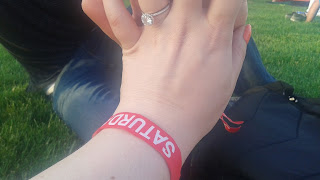 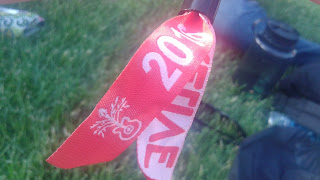 At the entrance of LaureLive was the Scene Stage and a few food vendors, as you followed the path back to the main stages there were vendor tents selling merch and handmade items. If you were like me and your bug spray or sunscreen was confiscated, there was a LaureLive tent selling a variety of necessities such as those items, water bottles, and ear plugs. 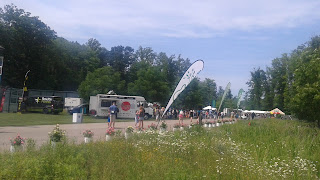 At the very end of the path was the large grassy area that was where the Music Elevates and Laurel stages were located. There were also more food vendors, beer, and cocktail vendors as well as all of the VIP areas.

The cube in the middle had the schedule for both days on it which was super helpful, as well as a map of the grounds. Essentially there was a large grassy area and two large stages on either end, I imagine the goal was to help make the transition between bands even quicker, because one stage could be set up while there was a performance on the other. 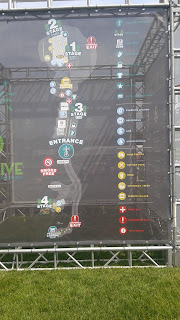 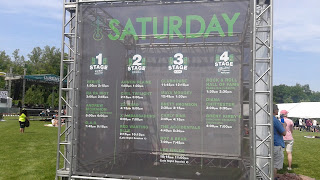 I'm not sure if you remember the temperature from last Saturday, but we do, it was over 90° the entire time we were at LaureLive. We were thankful to see the Chill Pop truck, Dave and I had previously tried their products at the Cleveland Flea last year and knew the popsicles would be cool and refreshing. 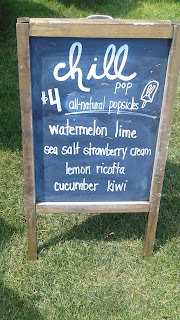 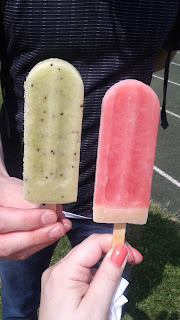 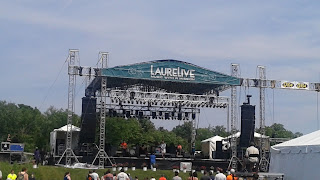 Many people were smarter than us and arrived with lawn chairs and blankets, we just sat on the ground and walked back and forth between the main stages. Due to the stages being on a hill, it was pretty easy to see what was going on regardless of where you were seated. 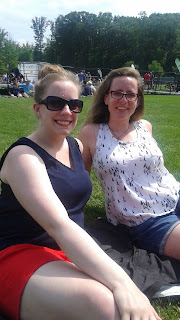 We did make one exception for the Andrew McMahon in the Wilderness show and got as close as possible to the front to make sure we had a good spot. 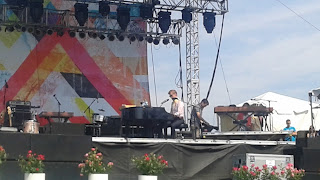 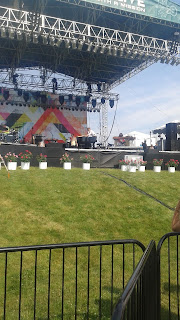 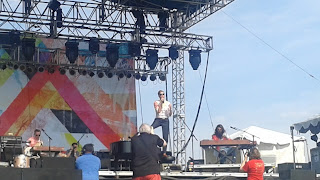 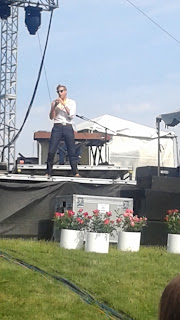 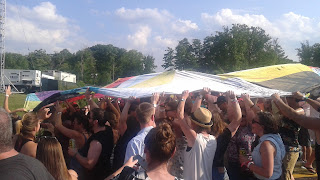 I understand the point of having the stages set-up on a hill for viewing purposes, but it was a little annoying to be so far away from all of the acts and to look at the backs of professional photographers falling all over themselves in the divide in order to get the best shot. Luckily for us Andrew doesn't care about barriers so he came right out into the crowd. 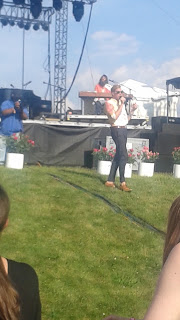 As I mentioned before it was hot last weekend and there was no relief from the sun. I was very glad that LaureLive allowed us to bring empty water bottles into the venue that could be refilled at the QuenchBuggy station. The opportunity to have cool water for free throughout the afternoon was absolutely crucial due to the heat. 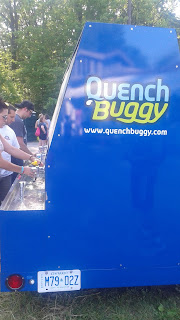 During the X-Ambassadors set we headed back towards the front gates to the Wok on the Wild Side station, they were advertising a vegetarian stir fry of freshly cooked soba noodles, vegetables, and signature sauce. It was a good amount of food to split and it was nice to see them making the food in front of us. 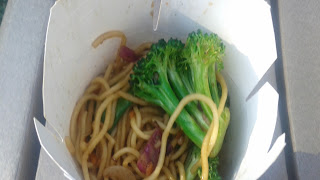 After dinner, we visited the Sweet Spot coffee, waffle, and gelato truck to try the peanut butter gelato which was vegan. 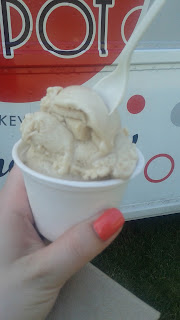 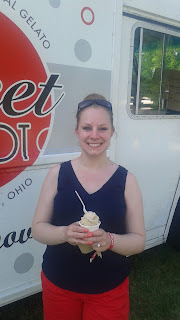 My friend Sara ordered a Watermelon Mule from one of the cocktail tents, it was tasty, but $12 was a pretty ridiculous price for the drink -- even with the jacked up festival pricing that goes with all events like this one. 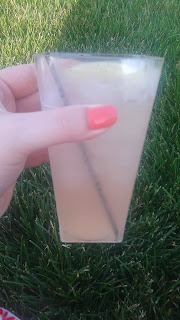 Enjoying the intermission before OAR set-up, they were the main act on Saturday, followed by two late night bands. 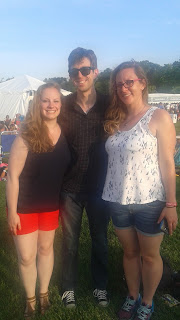 After a very exhausting day in the sun (we had worked out before LaureLive) we stayed for half of the OAR show and then headed back to our designated shuttle location. 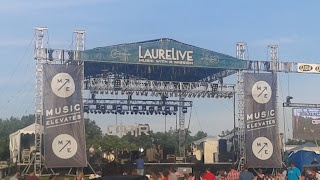 Overall we had an enjoyable afternoon at LaureLive and I always appreciate the opportunity to see my favorite band, however, there were some things that I didn't love about LaureLive. I really didn't like that cameras were prohibited, all of the photos in this post were taken on my cell phone. I can only assume the ban on all cameras was for the benefit of those with media passes, but it was pretty annoying, my point and shoot camera which is smaller than my cell phone was hardly going to ruin someone's professional photos. At the risk of it getting confiscated (RIP to my Deep Woods OFF) I left it at home and struggled to take good  shots on my cell phone. I also disliked the large gap between the stages and the fans, I understand that there will of course be a space, but staring at the butts of camera people clamoring to get the best shot -- I'm sure that they paid good money for their media passes, but at all of the concerts and shows I've attended throughout the years I've never experienced something like that.

On the LaureLive FAQ's page they mentioned that there would be several charging stations throughout the event for cell phones, if they were there, I never saw them. This would have been pretty beneficial since we could only use our cell phone cameras.

Despite my gripes, we did have a fun time, I wish we had known a little bit more about the event before attending so that we could have brought lawn chairs or a large blanket, it was hard to tell from the website exactly what the set-up and vibe was going to be. Almost every other show I've ever attended was standing room only.

An appreciable part of LaureLive was that it was kid friendly, there was a large children's area set up and almost everyone around us had children. One of the acts we saw must have missed the memo, because they did some heavy swearing during a song, but otherwise all other performers were incredibly tasteful and the children at the event seemed to have a good time.

Additionally, the food itself was good and as a vegetarian I appreciated the wide range of meatless options, but like most outdoor events like this the food was pretty overpriced.

For a first year event LaureLive did a wonderful job putting everything together and brought in some really big names, although there are some kinks that could be worked out in the future, the event was lovely and we look forward to attending in the future. 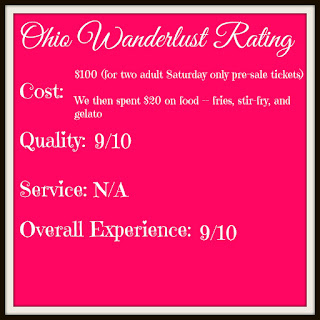