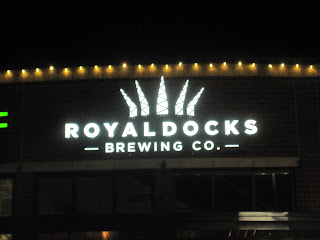 Last week Dave and I met up with some friends at Royal Docks Brewing Co., I'm a regular at Barre Fly Studio across the plaza and have been eyeing Royal Docks Brewing Company as a potential meet-up location for a while. The English Pub inspired brewery opened in 2015. We selected Thursday night as the night to check out the brewery due to most of us having a long weekend with Veteran's Day off work.

Dave ordered a flight of beer including: Vlad; Baba Yaga; Docklands; London Sig; Prodigal; and Daemonium. This was a diverse selection including an imperial stout, a coffee porter, a Belgian style, and an IPA. The samples were perfect, we were able to try out a few very different but still good quality beers. In classic form, Dave saved the best for last, and downed the assertive high hops beers earlier on, leaving the delicious and robust imperial stout to cap off the flight. 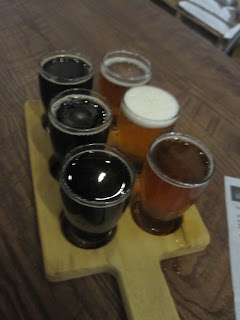 I was happy to see that Royal Docks had Pimm's Cup on the menu. This is my second time having this delightful cocktail that I fell in love with at Bourbon Street Barrel Room in Tremont. 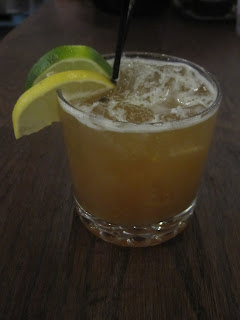 Dave and I split an order of the Bavarian Pretzel Sticks with mustard and dark ale dipping sauce. I hate beer, which makes it weird that we go to so many breweries, but I love beer cheese or beer mustard sauces. It's clear that Dave is the beer connoisseur of this relationship. We enjoyed the appetizer, but I wish there were more pretzels. 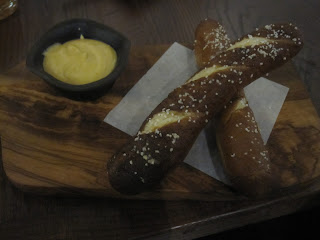 For dinner I ordered the Crispy Pear Salad with mixed greens, fresh pears, candied pecans, goat cheese, cucumbers, and poppy seed dressing (I had them hold the bacon). 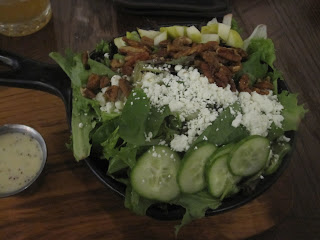 Dave ordered the Docks Margherita Flat Bread with fresh mozzarella, tomatoes, basil, and balsamic. The flat bread was delicious, we both wished there was more -- Dave ended up ordering a side of fries to tide him over. 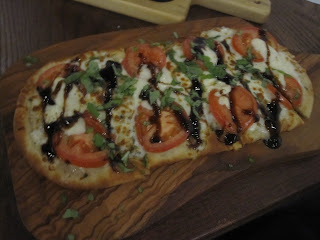 Dessert was what I was most excited for, French macaroons served with vanilla bean ice cream. There was a lemon, french vanilla, and chocolate orange macaroon. It's so hard to find good macaroons around here, Dave wasn't left with much to try, because I had a little more than half. 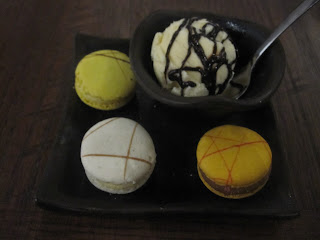 The decor spoke to the London vibe with a red telephone booth in one corner, and signs reminding you to "Mind The Tap". 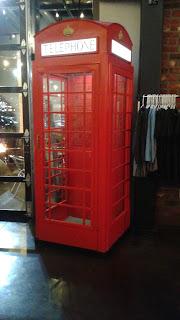 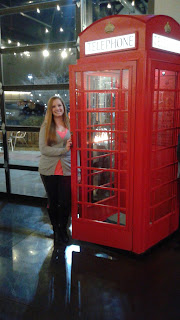 Royal Docks Brewing Company is a pretty casual joint usually you place your order up at the counter, but we were there on a slow night, so we were getting served at the table. There is a patio out front and a lovely fire pit which would be nice to enjoy on a mild evening. Aside from Three Brother's Corner Tavern across the plaza, everywhere else near Royal Docks Brewing Company closes pretty early -- there wouldn't be too much parking lot noise if you decided to enjoy the patio.

Our one criticism of Royal Docks Brewing Company was that for the portion size, we thought we were paying a little much. Both our meals were $10.00 and compared to similar items at other local restaurants we weren't getting much portion for our dollar. The food was really good, I wish I had left feeling more satisfied. 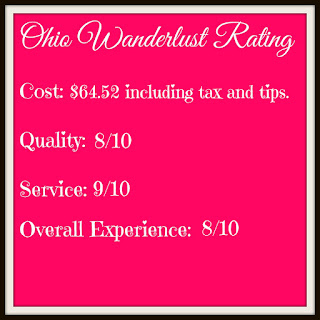