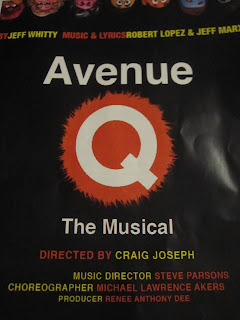 Avenue Q is a Tony Award winning musical production that addresses and satirizes the "coming of age problem" through the use of puppets a la Sesame Street. However, this show is absolutely not for children (the disclaimer notes that there are adult situations, profanity and full puppet nudity). Hilarious, poignant and raunchy, Avenue Q is perfect for adults with a sense of humor, because everyone can see a little bit of themselves in the characters of Avenue Q. 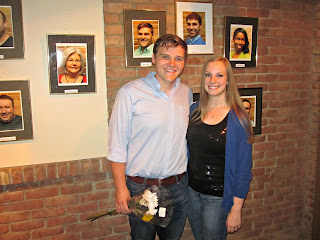 Matthew Heppe of Randolph, Ohio is starring in this production of Avenue Q as Princeton. Matthew graduated from Capital University in Columbus, Ohio and has acted in many productions throughout Northeast, Ohio and in notable roles such as Seymour in Little Shop of Horrors; Tobais Ragg in Sweeny Todd; and Fredrick Fellowes in Noises Off.

I conducted a brief interview with Matthew to find out some behind the scenes information about Aurora Community Theater's production of Avenue Q.

On his background in theater...

I started doing theater in primary school, mainly because my older brother Stephen did some shows. I continued to do shows throughout high school. I love theater and the people at Capital University so much, I made theater one of my majors. Theater is a passion of mine, it's something I'm proud of.


On the Aurora Community Theater and Cast...


I had previously worked with some members of the cast, the choreographer and director in other productions. I feel like I've been lucky with community theater. Everyone is talented and wants to put on the best production possible. The Director held weekly "family dinners" for the cast and that helped us to get to know each other and bond outside of the production.


On working with puppets...


It was a pretty standard audition and call back. Basically, if you're good enough to act, you can learn how to puppeteer. This is my first time working with puppets. When I was twelve I operated a puppet at Safety Land, but that was nothing compared to the puppet that I'm operating for Avenue Q. There are two types of puppets used for this show, my puppet, Princeton, is a double rod puppet. One of my hands operates Princeton's head and the other hand operates the two rods which move Princeton's arms. It was interesting to figure out and there was definitely a learning curve.

On why YOU need to see this production of Avenue Q...


It is absolutely hilarious. It is a fun show with beautiful songs and great acting from the cast members of this show. And it has an unexpected relevance, because it pushes boundaries and makes people question how they view things.

On the benefits of theater...

Each audience brings something different, making each show different. Even though there is the same cast, the same show, it's never exactly the same as the previous nights. It's a once in a lifetime experience for every show. 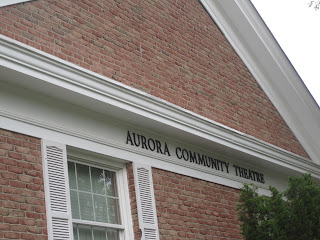 The Aurora Community Theatre was pretty easy to find, it's on E. Pioneer Trail in Aurora and is attached to the Aurora Library. There is a parking lot on site which seemed pretty small, but we arrived fifteen minutes before the show started and were able to find a space.

Once you arrive at the Aurora Community Theatre just follow the signs, there were signs directing us around the building into the area of the building where the theater productions are held -- there was no wandering aimlessly through the building trying to figure out where to go.

We were promptly seated. We still had a great view of the stage, even though we were in the back row of the middle section,

If you are easily offended, this show is not for you -- with songs such as "Everyone's a Little Bit Racist" and "The Internet is for Porn" this show is not for sensitive people. As someone who doesn't think she's easy to offend, I had a wonderful time. Some of the lyrics definitely are intended to deliver a little bit of a shock factor, but I didn't think that anything was in poor taste. That being said, this is the type of show that everyone can relate to, everyone reaches that point in life where there's a big "WHAT NEXT???" hanging over everything that you do. The twenty-something characters in Avenue Q tackle that problem with hilarity and finesse.

This cast brought Avenue Q to life. Princeton (Matthew Heppe) and Kate Monster (Anna Gallucci) used both their puppets and their facial expressions to display their mastery of acting. Both Heppe and Gallucci are also fantastic singers, Gallucci's rendition of "There's a Fine, Fine Line" was beautiful. I laughed especially hard at the antics of Christmas Eve (Maureen Thomas) and Trekkie Monster (Billy Stopczynski). Dave was a fan of the Bad Idea Bears (Justin M. Roth and Cassie Sakach), you know those cute little bears, or friends, that encourage you to buy a case of beer instead of paying your rent. Overall it was a job well done, the casting of characters was spot on and the hard work which everyone put into this production is very apparent in the finished product.

Dave and I could definitely see a little bit of ourselves in the characters, now that we're "so" much older and wiser at 25 and 27 instead of 22 (it's a joke) we can look back at the time in our lives and see a little bit of the humor in it. We were both familiar with Avenue Q, but neither of us had seen the production before. It certainly gave us a lot of laughs and something to discuss afterwards.

This production of Avenue Q has been gracing the Aurora Community Theater for three shows now, but don't worry, you can still get tickets shows will continue on July 11, 17, 18. Tickets can be purchased online.

Rating for Avenue Q at the Aurora Community Theater: 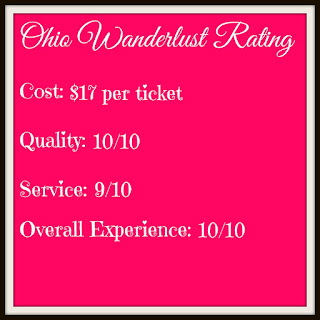