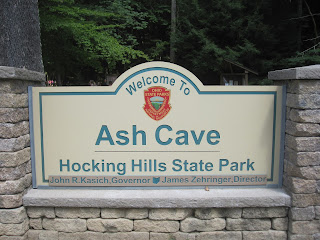 Ash Cave is the other park we visited while in Hocking Hills this past weekend. The area has two different trails, one in the gorge and one along the rim of the gorge. Both trails do connect, so it's easy to take one into the park and the other back out.

According to a website about the Hocking Hills parks Ash Cave was given its name due to the piles of ashes found under its shelter. "The largest pile was recorded as being 100 feet long, 30 feet wide and 3 feet deep. The source of the ashes is unknown but is believed to be from Indian campfires built up over hundreds of years. One other belief is that the Indians were smelting silver or lead from the rocks. Still another theory claims that saltpeter was made in the cave. No matter the source, several thousand bushels of ashes were found."

The gorge trail is paved and wheel chair accessible, traversing here was much easier than hiking at Old Man's Cave. 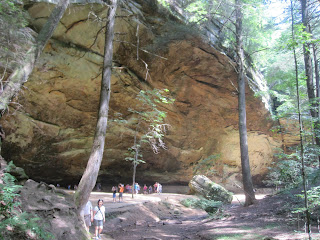 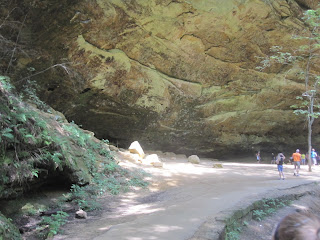 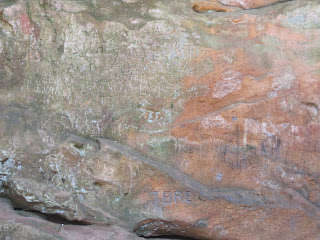 Sadly, due to the lack of rain the waterfall here was a mere trickle too. We'll have to head back in the fall to see the parks again once the weather cooperates a little more. 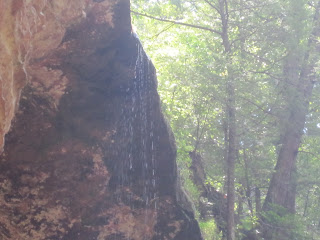 The gorge trail and rim trails connected at a set of steps, the rim trail takes you around the top of the cave and gorge, you even have a nice aerial view of the waterfall. 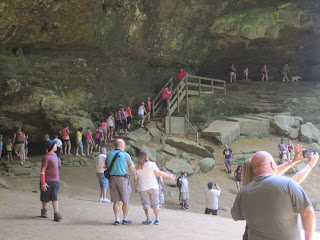 There are fences markers along the rim trail, like with Old Man's cave there were a lot of people stepping over the markers and intentionally going up to the cliffs edge. Considering it's a 100' drop from the top, you would think people would be more prudent.

The spectacular views are plenty good enough from the safety of the trail. 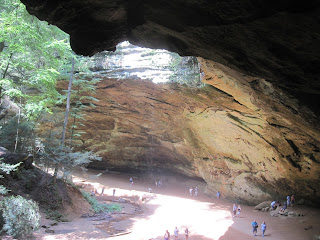 After hiking around Old Mans Cave, I was happy to tackle an easier hike. Maybe I'm not "fun" but I really wish that people would stay on the trail and mind their children. There were a lot of small children at this location as well, not being properly monitored by their parents. Maybe when summer is over and we take our second trip to Hocking Hills, the parks will be less crowded with careless people.

Despite my misgivings about dealing with people, Ash Cave was spectacular and a really great hike: 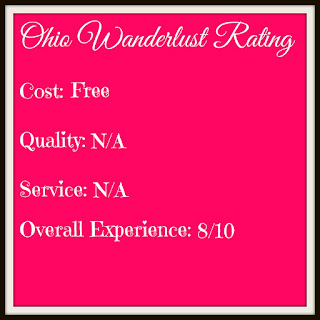