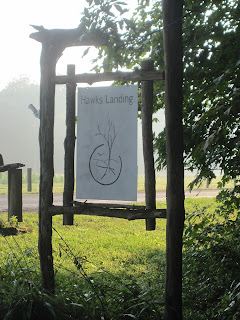 I spent this past weekend around Hocking Hills in Southern Ohio. We planned this trip a little spur of the moment and chose Hawks Landing due to their great cabin rates. The only trade-off is that Hawks Landing has primitive cabins. This is not the place to stay if you're expecting running water, electricity and a jacuzzi (unless you stay in their Locust Grove Lodge, which does have running water and electricity) because the two sleeping cabins use composting toilets and solar showers. Hawks Landing has five sites, Locust Grove Lodge which can sleep four people, two tent sites and two sleeping cabins.

One word of advice, if you've never been to Southern Ohio before, you might want to avoid arriving late at night. We ended up at Hawks Landing after 10 p.m. and driving the narrow, winding roads in the dark was pretty difficult.

Upon arriving, just park in the designated parking spaces which are one of the first things you'll see and then you can head up to check-in.

We carried everything to check-in with us, which made it easier when we were led to our cabin. Hawks Landing's cabins provide the perfect amount of seclusion which means that you will need to walk to get there. The walk to Dogwood was uphill for the most part, we were led there the first night, but ingress and egress were explained to us and were perfectly easy to tackle in the daylight. 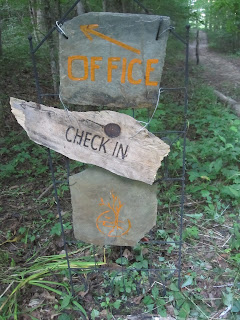 Our home away from home for two nights. 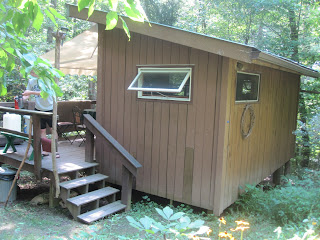 The Dogwood Cabin has a front deck which is equipped with furniture and a canopy, so that you can use the deck even if it's raining. 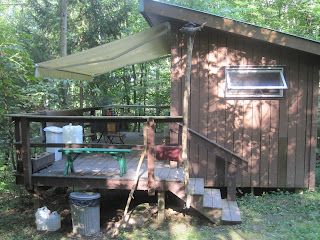 Another view of the deck. 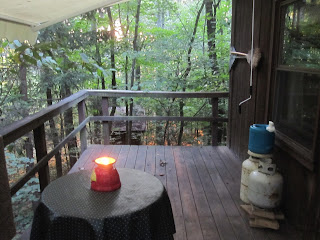 Remember, this isn't glamping, so just around the cabin is the solar shower and compost toilet. These are both only used by the cabin occupants and have plenty of privacy. 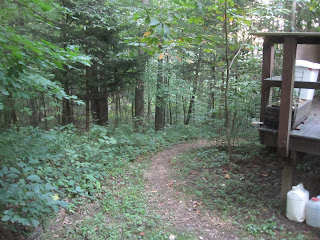 The shower is the first thing you'll pass on the far side of the cabin, there is a shower curtain if you'd like to use it. If not, you can check out the scenery. 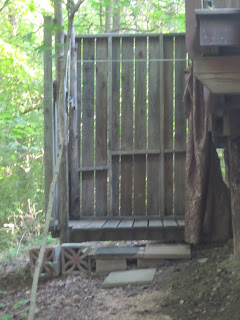 Neither of us was familiar with a solar shower, but it was pretty easy to use. The solar shower bags are filled in the morning and warmed in the sun throughout the day. They are delivered to your cabin between 4:00 and 5:00 p.m. and the first bag is set up for you. I'm not sure if receiving two bags is standard or if we received two, because there were two of us.

You control the water using the valve on the bag (or on the nozzle) and use the hose that is attached to shower off. Ever heard the statement "save water shower together"? You don't really need to save water, but having a helping hand made using the solar shower easier. The water drains out of the bag into the hose via gravity, so the hose needs to stay pretty low -- if you try to lift it over your head or up to high the water will stop flowing. Having another person operate the hose was especially helpful when washing hair, because it allowed one person to lather up and bend over to the right height so that the other could hold the water hose overhead.

I had been skeptical about the solar shower, but it was actually kind of fun. I entered the shower covered in sunscreen, bug spray and sweat. I left the shower clean and that's all that really matters. 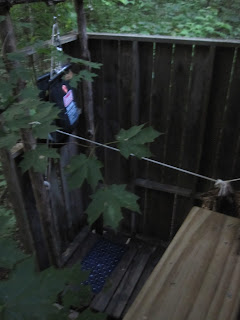 The composting toilet is past Dogwood Cabin and the outdoor shower. Although I was totally skeptical about it, it really was superior to a traditional outhouse. It's much better for two reasons.
The first, is that unlike in a traditional outhouse, the composting toilet is cleaned out after each set of occupants. So when we arrived there was nothing in it and there was a sanitary seal on the lid, which made me feel much better about using it. The second reason is that the composting process helps to prevent why outhouses are gross in the first place. After using the bathroom, you sprinkle the provided peat moss into the bowl, the composting process prevents any scent other than peat moss. I was seriously skeptical about this, but after being used for two days the composting toilet didn't smell any different than it did on the first night. 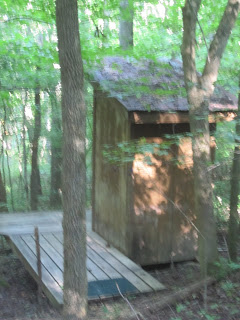 On the other side of Dogwood Cabin is a small garden and a fire pit. 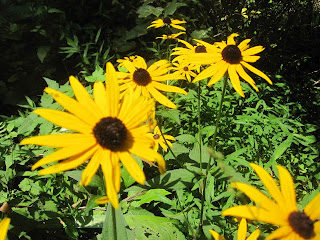 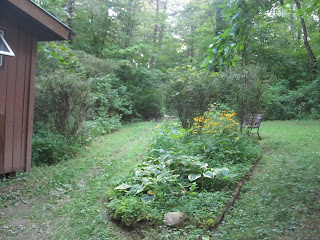 It's illegal to transport firewood in Ohio, for various conservation reasons, you can purchase firewood from Hawks Landing. $5 per bundle. 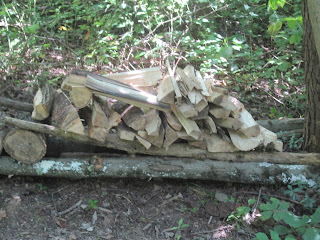 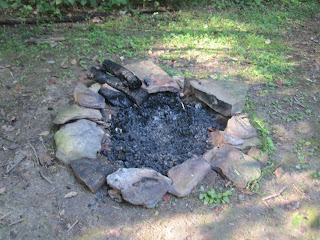 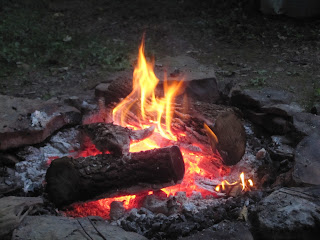 The cabin is surrounded by woods on three sides. It made for a peaceful evening, we're not used to hearing crickets and birds, but rather traffic noises and sirens. 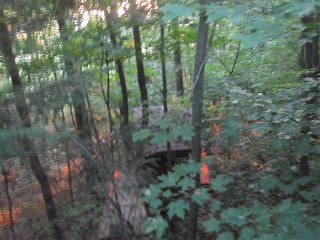 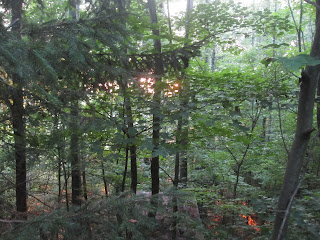 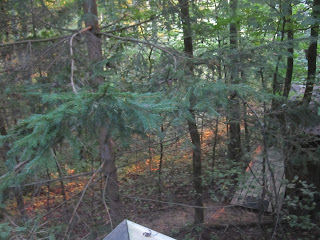 Inside the cabin there is one double bed, a small table and two chairs. As you can see we did have light, the solar power provided lighting as well as a fan. It was recommended that we not run both the lighting and fan at once to avoid draining our power. It was nice to be able to use the lights at night to avoid bumping into each other or furniture.

There was also one additional charging port on the solar power box, you would need to use a car charger, as the power supply does not contain a traditional two prong outlet. However, it's worth noting that I had zero cell phone reception for two days and Dave only had one bar, so charging your phone might not be worth it. 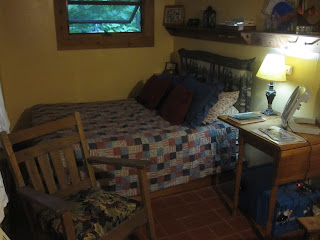 The other side of the cabin contains a small kitchenette with a two burner propane stove. 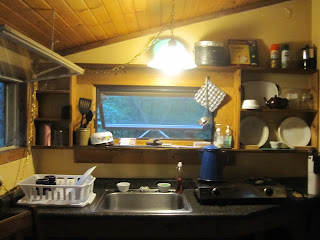 Hawks Landings states on their website that they will provide everything you need except for food and clothing and we were seriously impressed with everything they thought of providing. All of the linens, pillows, towels, plates, cups, etc. is taken care of for you. They even had cooking spray, foil, cast iron pans, camping chairs, marshmallow roasting sticks, hand soap and dish soap.

You should bring clothing, food and basic toiletries, but otherwise you're covered. There were even some board games, books and magazines inside the cabin for use if you were stuck inside due to inclement weather.

One of the nice touches was this journal which contained musings from past guests. If you check out the Dogwood cabin you can read the note we left. 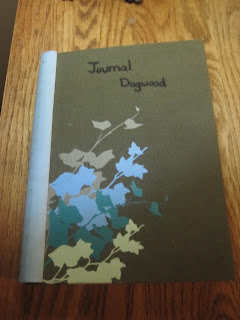 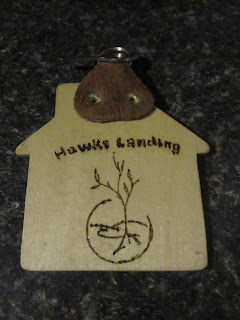 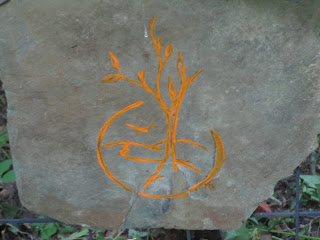 I am not a camper. I enjoy hiking, but I don't even really like being outside. Our stay at Hawks Landing far exceeded my expectations. Dave and I had a lot of fun experiencing something new together and although we were without the traditional comforts of home, this was far from roughing it in the woods with no shower or bathroom.

It wasn't all perfect though. The bed has a full size mattress and while it comfortably sleeps two people side by side, Dave who is 5' 11" felt smooshed and struggled to sleep because of it. I was mainly prepared to be hot and miserable for two nights due to the 90 degree weather, but due to the cabin being in the woods it was actually quite chilly both evenings, so bring warmer clothing for sleeping. I know that it's camping and outdoors, but some yellow jackets were working on a nest in the outer wall of the cabin. I hate bees. Hate them. And while honey bees are useful and helpful, yellow jackets are pretty aggressive and make me nervous. They didn't bother us while we were there, likely because I avoided getting near them at all costs, but it made me hesitant to sit out on the deck, because of their proximity to me. I know that they need to live somewhere, but I would have preferred it to be somewhere other than the wall of the cabin. 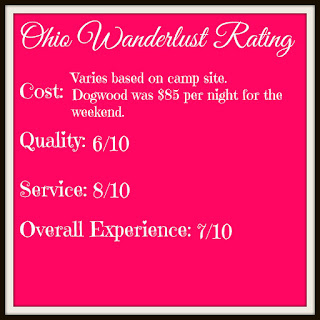